Another recruit for the "colleagues" 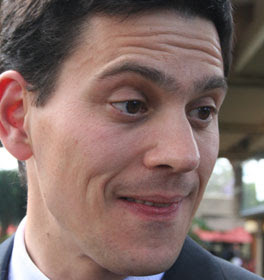 Inevitably, the media and the political circuses are focused today on the Brown reshuffles. It took little skill, therefore, to predict that this would drown out any other political news.

It is slightly comforting, therefore, to find the Daily Mail's coverage of the reshuffle including this item:

Mr Brown wants to ratify the new constitution - handing another huge chunk of power to Brussels - without a referendum. This won't be popular, and once the document is published, it'll be increasingly clear that it is the original constitution in all but name. A series of EU summits this year will keep it on the agenda.

We hope that is the case, and that we do see some political fireworks at the summit in October and from the signing in December, if the colleagues manage to keep to their breakneck timetable. When the details of the treaty do emerge, one hopes to see taunts of "Blair's poodle" as Brown goes tamely off to Lisbon to sign the document at his (previous) master's bidding.

The bad news is that a key player in the unfolding drama will now be David Miliband, Brown's new foreign secretary – especially if, as predicted, Brown is more focused on domestic affairs. Miliband, therefore, will more likely be an active player, rather than a "bedwarmer" in the manner of his predecessor Margaret Beckett.

Unfortunately, this man is a committed Europhile, as is evident from this speech to the Max Planck Institute in February 2002.

Evidence of where his loyalties lie also come from the fact that he was founder of the openly Europhile Centre for European Reform, which is currently hosting such delights as this. And, of course, while he has been Environment secretary, he has been consistently pushing for greater EU involvement in environmental issues – of which this is a classic example.

Although in some quarters, Gordon Brown has acquired a reputation for being something of a Eurosceptic, his appointment of a strongly Europhile foreign secretary does not auger well. The new treaty negotiations, as far as the "colleagues" will be concerned, will be in safe hands.

Of course, with his interesting family background, this is not entirely surprising (more here).