We're only a blog… 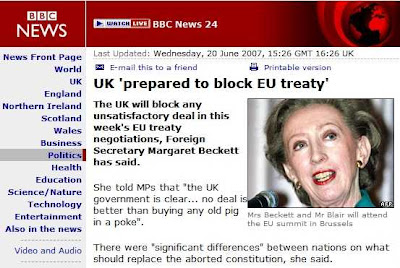 Mercifully, the slow torture of the EU "summit" soap opera is coming to an end, with the "colleagues" gathering in Brussels today for their two-day (possibly three) European Council meeting. Soon it will be all over.

In one thing, however, we can take great comfort – that the Conservative shadow foreign secretary, Mr William Hague, is well and truly on the ball. He told the House of Commons in a debate yesterday that, "Tomorrow, the European Union's Heads of State and Government meet to try to negotiate a treaty of fundamental importance to the EU's future."

The BBC is also keeping us well-informed (see headline above). From its website - and its broadcasts – we learn that the UK may be seeking to block the treaty during "this week's EU treaty negotiations". And the "summit" is expected "to go to the wire as the 27 member states wrangle over how much of the constitution … should be revived."

So far, so good but just to be on the safe side, we need to check The Times. All is well: it is telling us that foreign secretary Margaret Beckett has given a warning that the UK will block any unsatisfactory deal on a replacement for the European Union constitution.

This was also during yesterday's debate when she gave what The Times happily informs us is "her bluntest statement yet" ahead of "tomorrow's crucial EU summit". Quoting the lady, the paper then tells us that, "She said it was 'not inevitable' that there will be an agreement on a new amending treaty to govern arrangements of the 27-member EU.

However, just a little, niggling worm of doubt intrudes. Lowly as we are, we thought we might just look up what Mrs Beckett actually said, as The Times on puts the two words, "not inevitable" in direct quotes. Did she say all the words attributed to her?

Well, amazingly, she didn't. What she actually said was, "I have already said that it is not inevitable that there will be an agreement this weekend." This is shocking! The Times has inserted a whole phrase, which the lady never uttered. She made no reference to: "a new amending treaty".

But of course, this is only a slight detail and The Times cannot possibly be wrong, especially backed up by such a prestigious source as the BBC. And it is telling us: "The UK will block any unsatisfactory deal in this week's EU treaty negotiations, Foreign Secretary Margaret Beckett has said…".

No sweat – these must be treaty negotiations. The BBC says so. But, once again though, that little niggle intrudes. Early in the Commons debate, which Hansard dutifully records as the official record, we get an early intervention by SNP MP Angus Robertson. He tells Beckett that: "…Officials in Brussels yesterday agreed a draft intergovernmental conference mandate …". This is how Beckett responds:

I think that there is a misunderstanding. I hope that I heard the hon. Gentleman correctly, because I do not want to correct him if I did not, but I think that he said that officials had agreed a mandate, and that is not the case. The document produced in Brussels yesterday was the German presidency's proposal, and that is what we will be discussing at the weekend. It has not been agreed by anybody.

So, from the horse's mouth, we find that today's summit is going to discuss "a draft intergovernmental conference mandate". The BBC is putting words in Mrs Beckett's mouth.

This is a surprise. And it gets worse. Later in the debate, Mrs Beckett airily tells the assembled MPs: "It is worth repeating that any treaty that results from this European Council and any subsequent intergovernmental conference would, of course, be laid before Parliament…".

So what's this then? It looks like we might be getting an "intergovernmental conference" after the European Council. But don't bother looking to the BBC for an explanation, because you will not find it. Nor The Times and certainly not William Hague.

Oddly though, aid comes from an unlikely source - The Guardian. There, Patrick Wintour calmly tells us that Margaret Beckett has said "that there would be no point in going ahead with an inter-governmental conference after the EU summit in Brussels tomorrow and on Friday unless there was an agreed, detailed mandate for setting out the framework of what will be discussed."

Quivering with excitement, we rush off to the International Herald Tribune which, in an almost matter-of-fact way, tells us that chancellor Angela Merkel of Germany has said she wants EU governments to approve the outlines of a new treaty at the meeting, then hold a conference to hammer out the details with the aim of ratifying the revamped document in time for European Parliament elections in 2009.

Breathlessly, we resort to Deutsche Welle, but this offers no succour at all for the BBC-Times-Hague triumvirate. "European Union leaders", it intones, "prepared Wednesday for a key summit aimed at agreeing a mandate for a new treaty that reform (sic) certain EU rules."

I know. Let's go to the Washington Post - the left-wing "liberal" media. It's bound to agree with the BBC. This is what it says:

On Tuesday, Merkel presented her counterparts with an 11-page shopping list of issues she wants included in negotiations on a new treaty - a list EU leaders will have to agree to over the next two days before full-blown technical negotiations on replacing the dead constitution can begin.

Oh dear! So, who are we to believe? Are the "colleagues" negotiating a treaty, or are they simply aiming to "agree a mandate" for a later intergovernmental conference at which a treaty will be negotiated?

Well, the BBC, The Times and William Hague, all singing from the same hymn sheet, cannot possibly be wrong. Mrs Beckett? What does she know? International Herald Tribune? What does it know? Deutsche Welle? Need one ask? And The Guardian? Who believes it anyway? The Washington Post? Liberal trash!

Just a thought though. What happened to the Telegraph's recent confident prediction that Blair, "will sign the new European constitution just before he leaves 10 Downing Street"?

Ah! It's in today's Daily Telegraph: "Mr Blair", it says, "is getting ready to sign up today or tomorrow to the bulk of the previous EU Constitution that was rejected by French and Dutch voters in national referendums two years ago, sources close to the negotiations allege."

Sources close to the negotiations, which open formally when EU leaders arrive in Brussels today, have confirmed to The Daily Telegraph that Mr Blair will accept the loss of 52 vetoes in areas ranging from foreign policy to copyright protection.

On the other hand, there is always The Independent. It is telling us:

Britain looked isolated on the eve of an important summit of European Union leaders after Tony Blair failed to win enough concessions to enable him to agree to a new governing EU "mini-treaty." … There was frustration in London that Nicolas Sarkozy, the French President, and Angela Merkel, the German Chancellor, who will chair the talks, had not moved further to secure Mr Blair a deal he could sign.