A curious and scandalous mystery 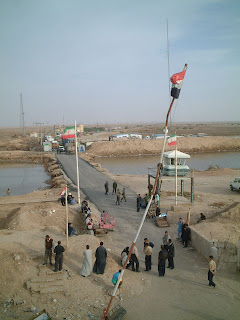 If there is an issue that should perhaps have been on the front page of the Sundays, it is what Christopher Booker describes in his column today one of as one of the most curious and scandalous mysteries of British politics.

This is the puzzle of why our government, with the personal support of Tony Blair, should have persuaded the EU council to act in flagrant breach of EU law, in order to appease the murderous regime in Teheran. It is, after all, Booker rightly observes, this regime that is doing more than anyone else to destabilise the entire Middle East, not least by pouring arms across its borders which are being used to kill allied troops in both Iraq and Afghanistan.

However, the matter is at last being raised by foreign ministers of the EU-27 this weekend, but only thanks to pressure from parliamentarians right across Europe. That includes resolutions just passed overwhelmingly by the Danish and Italian parliaments, plus interventions from a number of French politicians, with some of our own parliamentarians also being active.

What is on the table is the extraordinary decision by the Council last January to reject a ruling by the European Court of Justice (ECJ) that it had acted unlawfully in including the main opposition group to the Iranian regime on its list of terrorist organisations, the latest signed in December 2005, oddly enough by Ben Bradshaw, the UK environment, farming and fishing minister.

For nearly 30 years, Booker tells us, the chief opposition to the Teheran regime has been the National Council for Resistance in Iran, headed by Maryam Rajavi, who lives in exile in Paris, and a key component of which is the People's Mujahideen of Iran (PMOI). Its programme is to work peacefully for the replacement of the ayatollahs' theocratic dictatorship by a secular, democratic state. During that time more than 100,000 of the PMOI's supporters have been murdered, tortured and mutilated by Iran's Revolutionary Guards and their "Quods Force" overseas assassination squads.

In 2001, at the direct urging of the Teheran regime (as he admitted on the Today programme in February 2006), Jack Straw, as home secretary, first put the PMOI on the UK's list of proscribed terrorist organisations. In 2002 the Foreign Office persuaded the EU to add the PMOI to its own list of outlawed organisations, alongside al-Qaeda, Hamas and the like.

Last December, a year after the list had been renewed, the court of first instance ruled that this was unlawful, not least because the PMOI had never been given sight of any evidence to show that it supported terrorism. But in January, in an unprecedented breach of European law, the Council agreed with Britain that the ECJ's ruling should be ignored (a decision personally defended by Tony Blair in a letter dated March 19).

But that was the least of it. In a cynical nod to the ECJ, the Council did, in March, send the PMOI 16 documents supposedly justifying its actions. This, says Booker, turned out to be a self-parodying "dodgy dossier", including a 10-year old article from Time magazine and items trawled from unidentified websites, which contained not a shred of evidence that the PMOI was engaged in terrorism. Indeed the dossier broke another EU law, in that it was legally obliged to contain current evidence, whereas none of its contents referred to events later than 2001.

A measure of the strength of the PMOI's case is the support it has won from hundreds of politicians across the EU, who are calling for a reversal of the Council's decision. These include more than 200 MEPs and MPs from many national parliaments, and 405 cross-party members from both houses of our own. Thirty-five of these, including a former home secretary, Lord Waddington, will next month be appealing to a tribunal that the PMOI should be struck off the UK's list of proscribed terrorist organisations.

It is no hyperbole when Booker then says that what makes this story truly scandalous is that our government led this bid to appease a regime which plays such a central role in spreading terrorism throughout the Middle East. A Garland cartoon in Friday's Daily Telegraph showed Iran as a crab, extending two claws labelled "Hezbollah" and "Hamas" round the state of Israel. The claws might equally have been labelled "Iraq" and "Afghanistan", since it is now clear that Teheran is the source of much of the agitation and most of the arms which are also reducing those countries to chaos.

As Western supporters of the PMOI point out, the only hope of peace in the region is that the terrorist government in Iran should be replaced by one dedicated to democracy and peace; and that can only realistically be achieved through the NCRI and the PMOI. Instead of working with those who should be our allies, we do all we can to suppress them, at the behest of those fanatical thugs whose weapons are being daily used to kill our own troops.

In all Mr Blair's "legacy", Booker asserts, it is hard to think of a single policy more bizarre or more shameful. We can only agree.