It never rains but it pours (again) 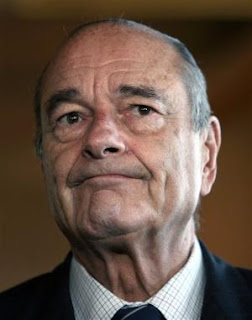 "If you have tears prepare to shed them now." Well, maybe not. After all the tragedy of Julius Caesar and the stunning speech by Mark Antony after his assassination have little to do with the petty conspiracies and tragicomedy of former President Jacques Chirac.

He is having a hard time, though. No sooner has he announced that he is not going to testify about the smear campaign waged against Nicolas Sarkozy than he is faced by another investigation.

First the Sarkozy business as summed up by, among others the New York Times:

The scandal involved false documentation that seemed to show large sums of money, presumably bribes, passing through secret bank accounts held by Mr. Sarkozy and others. Mr. Sarkozy said at the time that the scandal had been orchestrated to ruin his chances for the presidency.

Something to investigate, one might say, especially now that l'escroc Chirac has run out of immunity.

Pas du tout. It seems that even once the immunity is over one cannot be investigated for matters that happened while the immunity existed. Investigators will have to concentrate on events that took place before Chirac became president.

Fortunately, there is plenty to go on there. There is the fake jobs scandal that unfolded while M Chirac was Mayor of Paris and head of his party, RPR.

Investigators say operatives from the Rassemblement pour la République (RPR) were illegally on the Paris city payroll in a scheme to help finance the party, and that the equivalent of millions of dollars in salaries and fees were doled out.

Matters are unlikely to end there. Stories of kick-backs for sale of frigates and bank accounts in various countries are flying around and will, no doubt, be investigated. Well, actually, some doubt is felt on the subject, but President Sarkozy, who bears his predecessor no good will, has already said that there has been no deal about prosecutions.