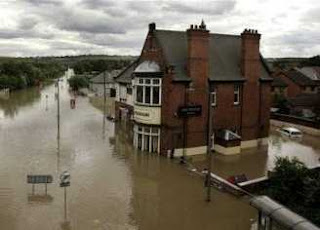 Within minutes of being appointed secretary of state for the environment in Gordon Brown's cabinet reshuffle, Hilary Benn's first task should be to take his begging bowl over to Brussels and ask for "emergency aid" to help UK regions hit by flooding.

That, at least, is what he is being urged to do by Europhile MEP Timothy Kirkhope, applying for relief from the £700m-a-year European Union Solidarity Fund. But, according to The Independent, he has 10 weeks in which to apply and then the UK only qualifies for aid if the damage exceeds £2 billion.

However, according to that fount of all wisdom and knowledge, the BBC, the Association of British Insurers is saying that the overall cost of the floods will run into hundreds of millions.

That, it seems is not anything like enough to enable us to trigger an application, even if local and national government costs are taken into account. And, in any case, the fund is intended only to provide immediate emergency aid "permitting the resumption of everyday life", such as temporary accommodation or provisional repairs to power lines and other vital services - but not for private losses.

At the moment, therefore, it looks like the UK hasn't had enough rain to benefit from an EU handout, which means the Europhiles are deprived of an opportunity of boring everyone with another example of how lucky we are to be members of the European Union.

If they want to benefit from this propaganda line, they'd better get praying for some more.