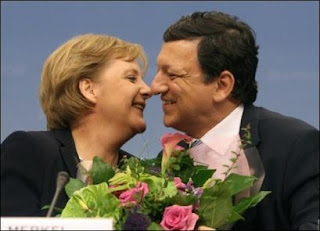 Both The Sunday Telegraph and The Sunday Times today offer powerful leaders demanding a referendum following yesterday's European Council. And both have also – with commendable speed – sussed that the treaty "mandate" is little more than another attempt to get the failed EU constitution, dressed in the different clothes of an "amending treaty", onto the statute book.

The Sunday Times offering is backed up by a well-argued opinion piece from Lord Owen, making the case for a referendum, while even The Guardian has been recording that demand for a referendum is growing.

Thus does the Mail on Sunday report that Brown has an "EU timebomb" as the "treaty" starts to unravel.

Still too many media organs, in fact, are reporting that a "treaty" has been agreed, but the message is nevertheless clear – once again the British people have been deceived with bland assurances that their interests have been safeguarded, while yet another prime minister has sold us down the river.

What is different now, of course, is that Brown does not face an election between now and the projected timetable for the treaty ratification. Blair, on the other hand, when he agreed to an EU referendum in 2005, was seeking to neutralise the issue of the constitution, to avoid it becoming an electoral drag.

But there is another difference. For months now, the message has been that the constitution is "dead" and that the only thing on the table is an "amending treaty" embodying the minor administrative changes needed to make the EU function more efficiently.

As more and more people realise they have been deceived yet again, even those who are indifferent to the EU issue are going to be annoyed. People, as a rule, generally tolerant of being taken for a ride by their politicians, nonetheless do not particularly appreciate having their noses rubbed in it (even if Merkel and Barroso do – see picture).

Thus, it seems more than a possibility that we will actually see a growing clamour for a referendum and, while Brown can afford to tough it out, the clamour will be an unwelcome distraction from the agenda he wishes to pursue as a newly appointed prime minister.

Despite having already – and rather unwisely – having ruled out a referendum, he might find himself having to concede one, simply to enable him to concentrate on other issues.

With the "colleagues" over-reaching themselves – trying again to sneak their beloved constitution past an increasingly cynical public – we would now endorse the calls for a referendum. We have seen the whites of their eyes.

Having been set up in 2005 to fight the then referendum against the EU constitution – only to have the Dutch and French kick it into touch – it looks like this blog could soon be back in business.