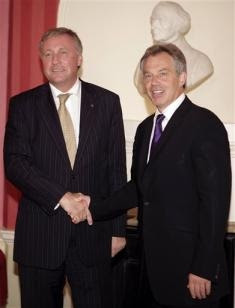 Frankly, there are rather more important things needing attention in this world than a new EU treaty, for which the "colleagues" so yearn, not least the conflagration in Gaza which, according to The Times has Hamas poised to take over, paving the way for a possible Islamist state on Israel's southern border.

If we had grown-up politicians, they might thus be focusing on such problems, rather than expending time and valuable political capital on interminable negotiations which, as they develop, seem to have more in common with theological discussions about angels dancing on pin heads than they do with real world issues.

But, in the obsessive world of the "little Europeans", nothing is more important than their precious institutions and their treaties.

Thus it was that our own prime minister – who seems to spend little enough time on attending to our national interests (of which stability in the Middle East is one) – wasted a good part of yesterday meeting Czech prime minister Mirek Topolanek in London (pictured), to discuss the EU's latest treaty-fest.

A productive use of time it was not, as the outcome was a reiteration of Blair’s oft-stated position, that there was no point in the "colleagues" doing a Proverbs 26:11 and returning to the EU constitution for another go.

According to Jurnalo.com, Blair was uncompromising in his statement after the meeting, saying that there would be "no deal" in Brussels unless demands for a EU constitution were set aside, telling a news conference that there would be "real difficulties" between some of the 27 EU members unless that happened.

His next opportunity to re-state this position will be on 19 June, when Sarkozy visits London for the first time as French president, another massive waste of time as the meeting with both Blair and Brown will be devoted to pre-summit talks on the putative treaty.

Meanwhile, the European Movement has announced the results of its "citizen consultations" on the new treaty in which, amazingly, it has found that citizens are in favour of having "more Europe".

They want, or so we are told, the EU to take on a leading role on environment issues, climate change and the sustainable use of energy. Moreover, they support a stronger voice for Europe in the world, as well as more engagement by the EU in social affairs.

Former EU parliament president and now president of the European Movement, Pat Cox, said the main conclusion to be drawn from the consultations is that people are not hostile to the European project, but rather would like to see more EU.

The fragrant communication commissioner Margot Wallström also added her euro's worth, declaring that she was "moved" by the findings and promised her loving citizens that she would "not to let them down". The citizen consultations, she said, had given "good, concrete results".

If they were that "concrete" however, one really does wonder why the "colleagues" are so hostile to the idea of referendums on the new treaty. If citizens so much want more "Europe", then winning should be a breeze.