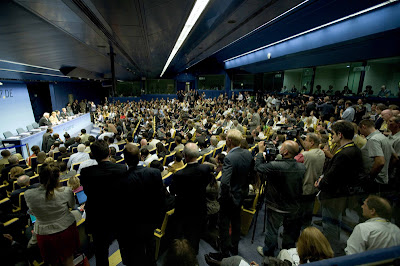 With the BBC World at One radio news programme telling us that the EU leaders are knuckling down to "hard negotiating on the way the European Union is run", the gigantic, ocean-going con continues apace, with the willing complicity of the media.

The fraud is perpetuated today by, amongst others, the International Herald Tribune which has reported that, "President Nicolas Sarkozy has convinced fellow EU leaders to drop a reference in their proposed new EU treaty to a goal of open, free-market competition within the bloc." 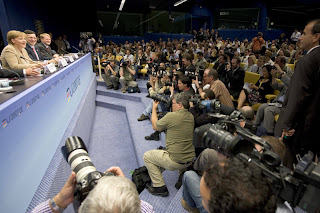 The point is, of course, that he hasn't. It cannot be said often enough that there is no "proposed new treaty" and there are no treaty negotiations going on. The European Council is discussing the text of the "mandate" it proposes to address to the IGC.

What is absolutely stunning is that the nature of this fraud has completely escaped attention. As we have pointed out before, the European Council is a (quasi) institution of the European Union which is, itself a treaty organisation. It cannot, therefore, negotiate its own treaties.

In presenting this European Council meeting as, in effect, an IGC, Merkel is playing a stupendous game. She hopes that whatever "mandate" is agreed, it will be treated with such reverence that it will become, de facto the definitive template for finished treaty draft, making the real IGC a mere formality – a foregone conclusion.

Whether or not this was a considered plan or a strategy that evolved during the German presidency is difficult to tell, but the fact is that it is perpetuating a fraud. 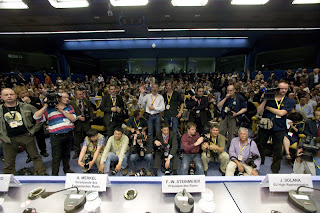 And the danger posed by this strategy is very real. The "colleagues" will agree a theatrical "deal" either today or tomorrow, and you can be assured that it will be presented by Blair as a "triumph" for Britain. Then the media will pack its bags and go home and "Europe" will drop off the agenda.

By July, however, the real IGC will be getting down to work, but it will get scant attention because, as far as the media is concerned, the issue was settled in Brussels in June. In October or November, up will pop the real treaty – with lots of very nasty, but highly technical amendments - followed by a snap summit – the real summit.

With too little time to get any political momentum going, the "anti" campaigners will be caught out and, for the UK at least, the new treaty will be railroaded through Parliament, with not a referendum in sight. And all because the media – and the population at large – were taken in by the theatre (click the pics to enlarge), and couldn't be bothered to look behind the glitz.