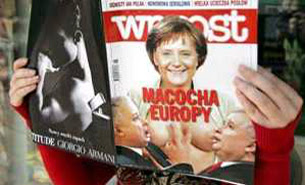 Relations between Poland and Germany, it seems, are going from bad to worse after the European Council agreement.

So says The Times which records a tale of a mocking magazine cover, photoshopped to show Merkel breast-feeding the twin leaders of Poland. This, the paper tells us with a nice choice of words, has enraged Germany and further curdled the relationship between Warsaw and Berlin.

The photo-montage in Wprost magazine, under the headline "Stepmother of Europe", places the head of the German Chancellor on top of the bare-breasted body of a 21 year old woman.

The aim was to highlight Polish dependency on Germany and explain what the magazine sees as a climbdown by the twins, president Lech Kaczynski and the prime minister Jaroslaw. Following the Polish slogan, "square root or death", to describe its position on the voting rights, Wprost sneers that it has boiled down to "milk or death" – reflecting the fact that Polish subsidies are underwritten by Germany.

Her threat to push ahead even if Poland had vetoed the agreement had been, he said, tantamount to telling Polish leaders "Haende hoch!" – a phrase still associated by Poles with the commands of Nazi occupiers – thus stoking up old enmities.

Rarely, since the fall of communism, says The Times has so much tension crackled between the two neighbours. This augers ill for a trouble-free IGC.

Even "Europe" drops off the agenda here, as Blair finally hands the premiership over to Brown and the political soap opera dominates the domestic news agenda, it seems there are plenty of issues on the Continent to keep fanning the flames.