Which side is it on? 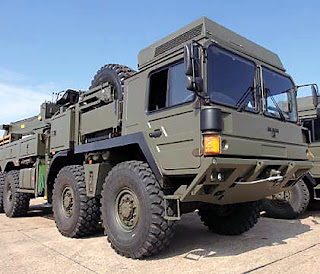 Typical of the self-serving propaganda element of the MoD, its website is lauding the imminent arrival of the new fleet of trucks for the armed forces.

Try as I might, however, I cannot get enthused at the prospect of the British Army being supplied by trucks made in Austria by the German firm MAN, especially when – despite the puff - they do not meet Defence Planning Assumptions and the specifications had to be relaxed for these trucks to be purchased.

Since MAN trucks were selected in September 2005, however, there has been an interesting twist in the saga.

At the time, the clear favourite was the US military truck maker, Stewart and Stevenson. It had a combat-proven product and had teamed with UK firms LDV Limited, Multidrive Limited and Lex Defence, in order to bid for the contract. It intended to build the trucks in Birmingham, giving the contract a high British-design and build component. Furthermore, the firm Multidrive was a specialist in off-road industrial vehicles and contracted to develop the Future Cargo Vehicle for the US Army.

Not only did that give a considerable British component, presenting us with an opportunity to restore military truck-building to the UK, it also offered the possibility of future export earnings from vehicles which would have been combat-proven in Iraq and Afghanistan.

But the real development was the following year when BAE Systems, flush with money from the sale of its share of Airbus, bought up Stewart and Stevenson. This US truck maker is now wholly British-owned.

We thus have the bizarre situation where the US military is now riding in trucks built by a British-owned company, while its products have been rejected by our own Ministry of Defence, which is now actively promoting trucks built in Austria by a German company.

This rather reminds us of the old joke, when a young officer – a stranger to London – was walking down Whitehall looking for the MoD. Unsure of which side of the road the building was, and seeing a fellow officer, he asked him: "Which side is the MoD on?" "Ours, I hope," the joke went.

Now, we can't even be that sure.