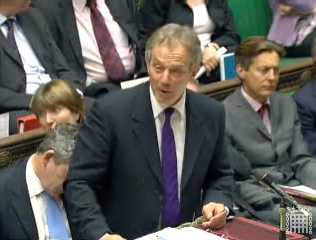 It was his penultimate appearance at the despatch box, the prime minister in the House at 3.30 pm precisely, to tell us about his negotiating "success" at the European Council.

The treaty is "quintessentially" in Britain's interests, he said. It would allow the EU to focus on the issues which really mattered, he said. This is absolutely right for Britain, he said.

The Boy Dave said Tony had "broken" a promise to hold a referendum.

But, said Tony, this wasn't a constitutional treaty, it was an amending treaty, so we didn't need a referendum. It would, "take months ... sucking energy out of the country for months". Dave was simply "going through the motions" by demanding an EU referendum.

Dave said Tony had sanctioned the transfer of powers from Britain to Brussels "without the permission of the British people".

Tony said all Britain's "red lines" had been preserved.

Tony said they had.

Debate in Parliament on this issue don't work. We need a referendum. "Let the people decide," says Dave. For once, he's right.