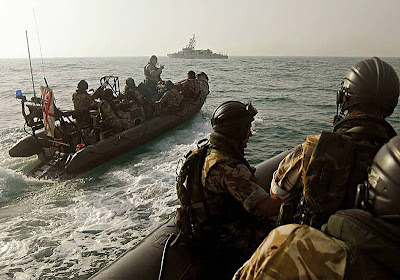 In the long-running saga of the 15 Royal Navy and Marine hostages taken by Iran on 23 March, defence secretary Des Browne has announced the outcome of the Fulton and Hall committees, which have now made their separate reports.

This comes two months after their inquiries were announced, details of which were further amplified on the MoD website.

Above, you see a pic of the new style boarding parties. Note the addition of a GPMG on the pintle mounting. "Don't mess with me", it says. But there were "no equipment or resource issues" on the day, says Browne. There was no single gross failing, but a coming together a series of small vulnerabilities. There is no case for disciplinary action … but many individuals could have done more.