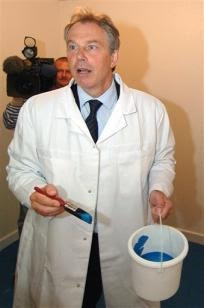 When is a constitution not a constitution? When it is an "amending treaty". That is what politics.co.uk is conveying from the Prime Minister's Official Spokesman (PMOS), gleaned from the weekly press briefing.

It is upon these mind games that the government's case rests for denying a referendum on the new treaty expected to come out of the IGC. However, this in turn rests on the line re-affirmed by the PMOS: "We have said this should be a treaty without the characteristics of a constitutional treaty."

He adds, in what will be turned round to the Conservatives if they get too uppity: "No previous amending treaty has required a referendum" - the ritual hint that the Tories gave more away at Maastricht.

Clearly, though, the government fears a referendum, for "Downing Street" is attempting to downplay suggestions EU leaders will agree a treaty which does not refer to itself as a constitution but retains many of the elements of the failed document.

Thus, we are told, Merkel's comments should be seen as a "wish-list". The PMOS insists the UK would not accept some of her recommendations. Here, though, we can expect some straw dogs (or men – I’m never sure which), to allow Brown to come home claiming victories against the "colleagues".

Nevertheless, even Merkel, in her report to the European Council allows that a number of contentious issues are wholly unresolved, so there are plenty of issues with which the “colleagues” can play games, keeping the British government in a constant state of alarm.

Meanwhile, the Financial Times - and so far, only this paper – is suggesting that Blair (seen in the pic with his favourite colour) is in line for the job as the first full-time European Union president. This, we are told is being actively touted by Sarkozy, who is "understood" to have discussed the idea with other EU leaders.

However, given Blair's overt support for Bush in the war against terror, and his drift away from "the heart of Europe", it is hard to give this perennial story any credence. A shaggy dog might stand a better chance.