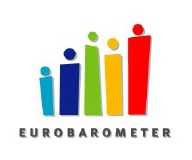 Nicely timed for the grand "summit" (aka European Council meeting) tomorrow, the latest survey on public opinion in the European Union has been rushed out, telling us that more people love Big Brother the EU than ever before.

The survey is from our old friend Eurobarometer (presumably mercury-free) and the EU commission, according to Reuters, is hailing the survey as showing "an increase in public support for the bloc, its institutions and the idea of an EU constitution."

And, at odds with its reputation as a hard case, it seems that optimism about the EU was highest in Poland.

Overall, the three main indicators of attitudes - support for EU membership, perceived benefits of membership and the EU's image - rose in the last six months by 4, 5 and 6 points to 57, 59 and 52 percent respectively and – if you can believe this - the level of trust for the commission and the EU parliament showed a similar trend, each rising 4 points to 52 percent and 56 percent respectively over the same period. Interestingly, support for EU membership in the UK rose by five points (see below). 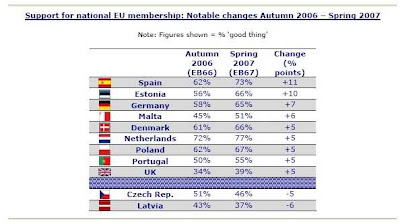 Two-thirds of the near-30,000 respondents supported the idea of an EU constitution and just under half supported further enlargement. Both scores represented gains of three percentage points.

Eurobarometer, of course, is the organisation that predicted a "yes" result for the French and the Dutch on their EU referendums, so you can take the findings with a pinch of salt. However, of one thing you can be assured – the "colleagues" will believe the results and will use them to convince themselves that they are truly loved.

No doubt, they will also take heart from the finding that there are no EU member countries where more citizens are opposed than are supportive of membership - although Eurobarometer notes "significant minority opposition in the UK (30 percent), Austria (25 percent), Finland and Sweden (both 24 percent) as well as France (21 percent).