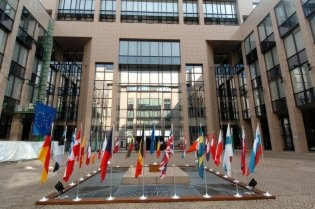 That is what Mariusz Muszynski, says, in an interview with Spiegel. He is the commissioner for Polish-German relations in the Polish foreign ministry and is discussing the forthcoming treaty talks. He also accuses Germany of being more concerned with consolidating its own power than EU unity.

That he feels it necessary to make that declaration gives a hint of the pressures which the Polish delegation is having to deal with, and we can have some sympathy with him.

As we watch the manoeuvrings and machinations of the "colleagues", all through the filter of a hyper-active media, we too have to remind ourselves that "we aren't idiots", gripping that slender thread of sanity which is the Merkel Report, to be presented to the European Council on 21 June.

What that says, we have constantly to remind ourselves, is that the Presidency (i.e., Germany) is recommending that the June European Council agree to the rapid convening of an IGC (Intergovernmental Conference). It then suggests that the European Council give a precise and comprehensive mandate (on structure and content) to the IGC, "thus allowing it to finalise its work on a new Treaty before the end of this year."

Unless this report has been superseded without anyone being told, that is the current state of play. The "colleagues" will assemble in Brussels as a European Council a (quasi) institution of the European Union and, if they agree the report, they will indeed convene an IGC, with a view to negotiating a treaty.

Those who have followed closely previous treaty negotiations will know that an IGC is not so much an event as a process, during which first officials meet, followed by foreign ministers. Then, finally, there is the grand "summit", during which the prime ministers and (a few) heads of state battle over the outstanding issues, coming to an agreement on the text of the treaty which, at some later date, is ceremonially signed.

The current trouble is that that the media – and not a few of the member states – are playing the current round of discussions as if they were an IGC, which cannot be – there has not been one convened. Much of the confusion comes from the indiscriminate use of the word "summit" to describe the forthcoming European Council meeting – thereby failing to distinguish between the IGC denouement which is correctly described as a summit.

This is compounded by a lack of clarity – some of it undoubtedly deliberate – as to what is actually being negotiated at this time. In theory, in the absence of an IGC, the current round of negotiations cannot be about a treaty. The European Council has no locus in this matter. Only the individual member states can do this, their leaders representing their countries rather than (within the framework of the European Council) the European Union.

The best guess is that the great effort which the media is so avidly reporting is directed at producing what Merkel describes as "a precise and comprehensive mandate". The intent, it seems, is to bring it as close as possible to a finished treaty, to reduce the subsequent burden on the Portuguese presidency, which must take on the IGC and, supposedly, shepherd the process to its conclusion.

The reason for this, of course, is that Portuguese prime minister Socrates, as leader of a small country with its own serious political stresses, has neither the resource nor the clout to manage an IGC and bring it to a successful (in their terms) conclusion, if there are a large number of hotly disputed items outstanding.

In other words, in a few short days, it seems as if the "colleagues" are to be asked to sign up to a "mandate" rather than a treaty, but one which is as close to a treaty as Merkel can manage, in an attempt to make the subsequent IGC as trouble-free as possible.

The odd thing is that the European Council is in no position – under treaty law – to give the IGC a mandate. The EU (or the European council acting on its behalf) does not negotiate its own treaties. The member states do that, acting independently as sovereign nations, within the framework of the IGC, over which the EU has no authority whatsoever. The leaders of the diverse nations take their mandate from their own peoples.

On this basis, the members of the IGC are entirely free to set their own agenda, and make their own agreements. They are not in any way bound by – or even required to take note of – any mandate produced by the European Council.

Needless to say, the IGC will take note of this mandate. But any final agreement must be unanimous. Any single state – or group of states – can veto any final draft of a treaty.

This is not, however, how the media are presenting events. The hype is building to the extent that we are all being led to expect a final resolution on the Friday, the outcome being a final treaty draft.

Theoretically, that is possible – in that the European Council could convene an IGC and the same people could immediately agree that their meeting was a final "summit". They could then agree the text of a treaty. But that looks unlikely – there are too many issues outstanding, and too many players (like Poland) who are holding out.

Thus it is that we are indeed gripping tight to our sanity, watching and waiting for when the media circus comes to town, laying siege to the Justus Lipsus building (pictured), to extrude its torrent of verbal material and then to depart as fast as it came. Then, and only then, will we be able to attest – we sincerely hope – that we really aren't idiots.

Until then - in our view, at any rate – all the rest is theatre.