"Obey your own constitution" 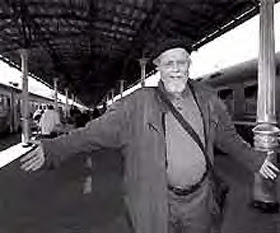 More by choice than luck I have managed to avoid writing about the European Council that has just gone and that has, as my colleague rightly pointed out, attempted to carry out a coup d’êtat in the European Union, usurping the powers of the member states and, in effect, pre-empting the constitution.

This whole business reminds me of one of the first post-war dissidents in the Soviet Union, now, I believe, a citizen of the United States, where he had a reasonably distinguished career as a mathematician, Alek Yesenin-Volpin.

The illegitimate and unacknowledged (probably because he did not know) son of the great Soviet poet and alcoholic, Sergei Yesenin, Alexander Volpin, as he was known for a long time, or Alek to anyone who knew him at all, first clashed with the authorities in 1949 when he was locked up in a psychiatric hospital for writing anti-Soviet poetry.

(As it happens, most of Yesenin's own poetry had been banned under Stalin, though the man himself was revered. Go figure.)

Alek was subsequently exiled to Karaganda, released on Stalin's death and rearrested several times subsequently, often ending up in the psikhushka. In some ways one can understand why the authorities remained convinced that Yesenin-Volpin, as he later became known, was obviously mad.

His main argument was that the Soviet authorities should obey their own constitution. This was the 1936 Soviet Constitution, the best, most fair and most free the world had ever seen, if one discounts the article about the role of the party. It is really a pity that its author, Nikolai Bukharin was shot in 1938 after a trial that left a good deal to be desired from a legal point of view.

Indeed, Alek Yesenin-Volpin was known to demonstrate with a placard that carried that very slogan: "Obey your own constitution". At first he was considered somewhat barmy by his friends and colleagues as well. Eventually, however, the idea was taken up by quite a few dissidents. After all, if there is a constitution, the authorities should obey it.

If there are rules according to which the European Union is to be run, the European Council should obey them and not try to circumvent them in an attempt to pre-empt the constitution.
Posted by Helen at 21:00