This is not a civil war 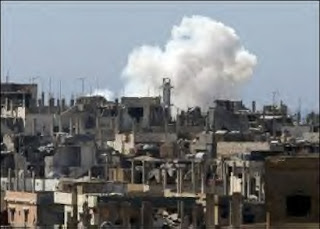 Al-Jazeera reports that fighting between the Lebanese army and the terrorists of Fatah al-Islam has spread to the northern town of Qalamoun where six "armed fighters" (is this translated from Russian, I ask myself) have been killed.

So far they have identified two of the men as Lebanese and three as Saudi with nationality of the sixth one remaining unknown.

Others, like the Middle East Times, give a different line-up:

A military source, on condition of anonymity, said that three Saudis, two Syrians, and an Iraqi were killed, while the Riyadh daily Okaz reported that four Saudi suspects had been arrested and another four killed before the latest clash.

Since May 20 when the fighting started, first in Tripoli, then in the refugee camp, 194 people have been killed, not counting the latest casualties. Well, that is the official figure but it is hard to work out how many civilians and terrorists are killed in the sort of fighting that has been going on.

Officially the figures are: 84 soldiers, 70 "fighters" i.e. terrorists and 40 civilians. The truth might be very different. One thing is certain: this is NOT a civil war. Got that?