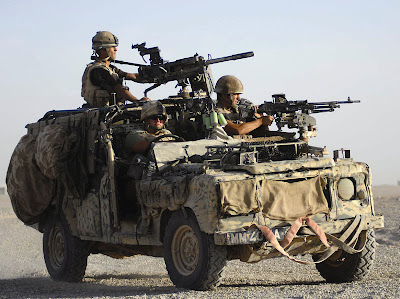 Any which way you cut it, the MoD has problems, not least as this Saturday's "toy" is the Ministry's idea of "world class equipment" – the WIMIK Land Rover. We beg to differ.

Nevertheless, that is the photograph it offers on its website in a piece headed: "Equipment and logistics vital to Afghan mission", with the caption as follows:

The lame bastards can't even spell manoeuvrable and, as for the "grenade machine gun", it is a Automatic Lightweight Grenade Launcher, while the "heavy machine gun" is a GPMG - very much a medium machine gun. As for the WIMIK being manoeuvrable, that also is debatable.

Despite this low grade drivel, the opening passage of the piece tells us that, "World-class equipment and top-rate logistics are playing a vital part in helping British troops bring stability to some of the most hostile parts of Afghanistan."

What is really terrifying, though, is the thought that the cretins whose bright idea it was to put such a lame, self-serving propaganda piece on the MoD site actually believe what they have posted or – perhaps even more terrifying – they think people reading it might be taken in by it.

No doubt, these same cretins have read this morning's Daily Telegraph over their decaffinated coffee and croissants, from the comfort of their Surbiton semi-detached residences, and are already constructing a polished rebuttal for the website.

Watch this space … we are seriously pissed off.