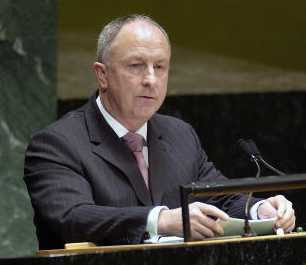 That is the view expressed by Irish minister for foreign affairs, Dermot Ahern, of Merkel's treaty proposals.

He was commenting on RTÉ radio, as reported by The Irish Examiner declaring that new agreement had not dramatically changed the substance of the 2004 agreement brokered during Ireland’s Presidency of the EU – that agreement, of course, being the failed EU constitution.

This is the first official confirmation we have had from any of the ministers present at the European Council that the text of the proposed treaty is very similar to the constitution, on which basis Ahern, himself, has said that, in Ireland, "It is likely that a referendum will be held."

The minister said that while there has been speculation that a referendum would not be required to pass the treaty, the decision to hold a vote was dependent on the advice of the Attorney General. But, he added, "It was our strong legal advice that the draft Constitution would have required a referendum in Ireland," and therefore this re-enactment of essentially the same text would also require a referendum.

Meanwhile, according to the IHT, after the euphoria over the agreement this weekend, the atmosphere in Berlin has turned sour, with Berlin convinced Poland cannot be trusted to stick to what it agreed to at the talks.

President Lech Kaczynski, who led the Polish talks in Brussels has said he was pleased with the outcome but commentators, particularly German, now fear that the president's twin brother, prime minister Jaroslaw Kaczynski - regarded as the tougher of the twins - could reopen the issue of Polish voting rights at the Intergovernmental Conference.

If, as some German newspapers are suggesting, the Polish twins do not stick to the agreement, we are in for interesting times at the IGC, with a possible repeat of the drama in Brussels. Not least, it will be fun seeing how the media explain that, when they have been presenting the Brussels agreement as a final deal on the treaty.

On the broader front, however, this is another straw in the wind that suggests that Merkel's deal is extremely fragile and could start to unravel at any time – especially as the Irish referendum story has been picked up by The Daily Telegraph this morning, with the obvious inferences drawn.

However, the paper is also suggesting that Blair has committed Gordon Brown to a politically binding mandate for the IGC. At last week's Brussels summit, it writes, "Angela Merkel, the German chancellor and holder of the EU's presidency, quietly pulled off something of a coup d'etat." It continues:

IGCs are usually governed by national vetoes and held on the basis that the agenda is open to any demands that member states want to raise. But Miss Merkel has stitched up Mr Brown, or any other leader that might have post-summit doubts, by getting unanimous agreement for a 16-page mandate. The detailed text has the weight of an agreement signed by all 27 EU governments.

One wonders whether Brown is going to take that lying down, bearing in mind that the European Council "mandate" has no legal force.