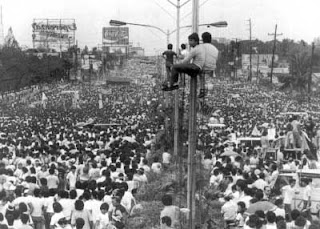 Like everyone else, we have a fascination with round numbers, hence the enduring attraction of round number anniversaries, and achievements that can be measured in like terms.

So it is today that we reach a milestone of our own, clocking up the "big three" - three million hits on what we chose to use as our "official" counter, since we started our journey into the unknown on 22 April 2004. At over three years old, this blog must count as an aged veteran and, from the scars, it certainly feels like it.

To have got this far is an achievement, but a small one. In strictly numerical terms – by comparison with the MSM, which we so love to deride – the circulation is pathetic. Even now, when we maintain a mere 3,000 hits on a weekday – dropping somewhat over the weekend – it is well evident that we are never going to mount a serious challenge to the hegemony of the established media.

Furthermore, while it would be nice to say that circulation was increasing, it is not. Unlike some blogs, our hit counter is visible and our stats are available to anyone who wants to see them. They tell their own story. At best, our readership levels are static.

In part, that is our own fault. We don't do trivia, or the lightweight tat that passes for political gossip, which attracts the hits from our sector of the market, and neither will we stoop to running narratives about celebs.

Moreover, our choice of core subject is hardly one to attract a mass audience. Even we will concede that chronicling the machinations of the European Union is often an exercise in applied tedium which borders on masochism. And if it has that effect on us, we can hardly blame readers for preferring the comfort zone of mindless tat.

For sure, we did open up the range of issues after the triumph (we like to think) of the negative verdicts on the EU delivered by the Dutch and the French, but that was probably more in the interests of self-preservation than anything else. However, we have tried to maintain a certain coherence, setting out our ideals in our manifesto.

What really brought in the hits, though, was the Qanagate affair, which has probably added a half a million overall to the count, somewhat distorting the statistical profile of the blog, but it was never going to be the case that we could sustain that level of hits.

The central issue, there, however, was not so much the event itself but the way the media treated it. Memories of that brought a wry smile on reading the self-serving protestations of The Daily Telegraph, and its claim to produce "objective" reporting. We know only too well how it squirmed at the time, as it – along with the rest of the media - tried to justify acting as a propaganda tool for Hezbollah.

Alongside our Middle East coverage, we have, of course, acquired something of a reputation for our reporting on defence issues and if, as I fondly believe, we were instrumental in speeding up the delivery of better armoured vehicles to our troops in Iraq – with the promise of saving lives – then that alone will have made the labour of this blog worthwhile.

And, while this half of the EU Referendum team will admit to an abiding interest in "toys", the coverage on this blog again is to make broader points, not least the abysmal coverage of the media on what we believe to be vitally important issues.

That much I have tried to convey in my coverage of the FRES project, which will define, to a great extent what our Army will be capable of in the future and will, therefore, either define or circumscribe some of our foreign policy options, more so, I suspect, than whether an EU foreign minister is created by the next treaty.

The total lack of media interest in this issue, therefore, speaks volumes, but the lack of interest in the blogosphere at large also tells its own story. Few writers, it seems, are able to see beyond the "toys" to the broader, more important aspects of this saga – a myopia shared by much of the political fraternity.

Yet, says Tony Blair, "there is a market in providing serious balanced news. There is a desire for impartiality. The way that people get their news may be changing, but the thirst for news being real news is not."

Market there may well be, but in our experience, it is extremely limited. If the MSM concentrates on tat and trivia – and so many blogs follow in their wake – it is because that, in the main, is what their public wants. You only have to see which stories get the most hits to realise where the popular interest lies. In pursuit of circulation, the MSM will go where the interest is.

Thus, we are able to define our own role. Neither of us get paid for our work – and the minimal advertising revenue is neither here nor there. We thus, effectively, get the same whether we have 10 or 10,000 readers. Neither have we anything to prove, and we have no political ambitions nor any desire to be part of the MSM. We do not need to win any popularity contests or keep sponsors or paymasters happy.

We can, therefore, please ourselves what and when we write, and the manner in which we write. Largely, we do so to please ourselves and, if it pleases others that is a bonus, but not a necessary precondition.

That said, a few readers were "pleased" (or appalled) enough to keep coming back -three million times in all, so we must be doing something right. We ourselves are pleased you did that, and look forward to a few more hits before we finally decide that pulling wings off flies might be more entertaining than blogging – and vacate the field.