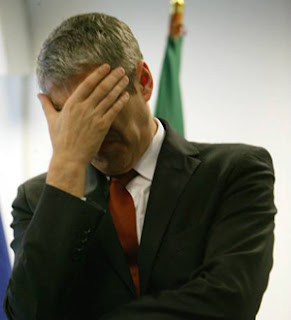 Even if they had deliberately planned it, the "colleagues" could not have organised a better timing for their coup d'etat on the European Council "mandate", relying as they are on minimal public scrutiny to get the thing translated into a treaty.

As long as the "Gordon Brown show" is dominating British politics, which it is likely to do for some time yet, one of most dangerous threats to the "project" – a campaign for a British referendum – will be starved of publicity and will struggle to get off the ground.

While the British media are thus preoccupied, the Portuguese, who take over the EU presidency on 1 July, can get down to work, rushing a draft treaty through the IGC quickly, before anyone notices what is going on.

Thus, Portuguese prime minister José Socrates (pictured) has told his parliament that his country would hurry what he called the "complex" task of concluding a new treaty. "Our objective is clear," he said, "not to lose the dynamic of the agreement reached in Brussels and approve as quickly as possible a new treaty for the European Union."

To see the process through, Portugal intends to launch the IGC on 23 July and Socrates is looking to have a treaty approved in October, with a formal signing in December. He then wants it ratified by all 27 member states next year, allowing it to enter force on 1 January 2009.

Technical experts will go to work in July to turn the mandate into a legal document - when they will see if political differences arise - before passing the job on to ministers in August or early September, leaving plenty of time before the 18-19 October meeting of EU leaders in Lisbon.

So the great stitch-up continues and it remains to be seen whether Brown will seek to impose his own will on the process and whether Mr Cameron will keep up the pressure for an EU referendum. On neither, would it be safe to rely.