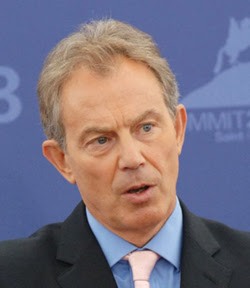 …to commune with the evil empire in Brussels, little Tony had some unfinished business which would have put him somewhat at odds with the "colleagues" – had they noticed.

Spotted by one of our alert readers (do we have any other kind?), No. 10 announced that the UK and the US had signed a "Defence Trade Cooperation Treaty" to strengthen the relationship between their armed forces.

In the agreement committed to improving the interoperability of equipment and systems to allow UK and US forces to work more closely together. The two countries have also agreed to improve transatlantic defence information sharing by reducing the barriers to exchange of defence goods, services and information.

Following the announcement, the Blair said he was "delighted" to reach an accord on such a vital issue, adding:

Achieving this agreement has become more important than ever before. At a time when British and American forces continue to work closely in defence and security operations around the world, both Governments believe we must continue enhancing our ability to cooperate together.

My guess is that this is not totally unrelated to the JSF project, and may now pave the way for the UK to make a commitment to the next phase. One thing you can be certain of, however, is that Tony didn't hand out copies of the press release to the "colleagues" in Brussels, especially as he has not signed up to their strategy for a European Defence Technological and Industrial Base.