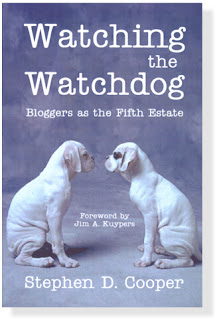 Sitting on the EU Referendum desk (one of them) is a remarkable book by Stephen D. Cooper, associate professor of communication at Marshall University, Huntington, West Virginia.

Entitled, Watching the Watchdog – Bloggers as the Fifth Estate, it explores "the distinct types of media criticism which have evolved in the blogosphere", giving us a thoughtful analysis of how bloggers set about their task of holding an otherwise unaccountable media to account.

What is particularly helpful about the book is that it provides a vocabulary for many of the activities which we, on this blog, do intuitively, and explains some of the framework in which we operate. So useful is it that we will post a review of the book in due course.

Of more immediate interest, however, is one of the articles on the front page of today's Sunday Telegraph, which seems a classic example of what Cooper calls "framing", to which effect we thought it would be both entertaining and informative to construct a critique around this theme.

First, to provide our own "framing", we offer something of what Cooper writes about the subject, to which he devotes a whole chapter of his book:

Facts become comprehensible to us as they are linked into coherent interpretations of real life situations or real world actors. Put another way, making sense out of daily experience and observation necessarily involves fitting isolated factual data into some sort of pattern we understand and find meaningful. In a similar fashion, journalists weave their factual description of events into a coherent storyline, however nuanced or complex, in order to produce a competent news product. It is difficult to find a piece of journalism that offers no interpretation of the facts it contains, since the stories could not be written without suggesting a storyline. If framing is an intrinsic element of our sense-making of direct experience, it is unsurprising that journalists perforce do it in their mediation of remote experiences for our consumption.

The media's framing is a staple of blog criticism, adds Cooper, which may take the form of disputing the frame of a news story, reframing the facts into a distinctly different interpretation, or contextualising a frame in a different way. What we will do is look at the Sunday Telegraph story and attempt to identify how the framing affects the narrative.

The story itself – which will come as no surprise to our regular readers – is the one headed: "Top medic blasts deadly delay in treating troops" but, the content can speak for itself. It is the "framing" which interests us.

Just to put it in context, the Telegraph retails claims by Lt Col Paul Parker (an orthopaedic surgeon who has served on operations in Iraq, Afghanistan, the Balkans and Sierra Leone). He asserts that wounded British troops are being evacuated from the battlefield more slowly than the Americans managed in Vietnam 40 years ago and that hospitals could run out of blood, oxygen and drugs if more than two seriously wounded troops arrived at the same time.

Parker also complains that British (military) ambulances are "antediluvian" and "reveals" that the laboratory at Camp Bastion in Afghanistan, which is used to match blood and test samples, had to close between 11.30am and 3.30pm because the air-conditioning system could not keep the temperature below 97F (36C). And he also "reveals" that there had been no CT scanner, which is used in the diagnosis of brain injury, in the field hospital in Afghanistan for more than a year. A unit finally arrived in Helmand province this month.

Those are the key facts of the story, to which Parker adds his view that a fundamental failing of British defence policy was that the military still lacked a "dedicated all-weather medical helicopter fleet", specifically designed to rescue battlefield casualties. This is clothed in more detail with a direct quote:

We use support or anti-tank helicopters that are re-roled on an ad hoc basis for the critical care and transport of our sickest patients. We still do not have a dedicated all-weather military helicopter evacuation fleet. Should we not be asking why? We have gone backwards in terms of our evacuation time-lines.

Now, crucially, Parker blames the delays in treatment on "too much middle management", but that is not enough for The Sunday Telegraph. It must now add its framing, to ensure that we absorb the message it wishes to convey.

If you are in any doubt about where the paper wants to take you, however, the lead editorial makes it abundantly clear. Headed, "Casualties of Mr Blair's failure", any reference to Col. Parker's complaint of "too much middle management" has gone by the wayside.

Instead, we get Tony Blair's "zeal for military intervention" which has not, however, been matched by a willingness to pay for it. Says the leader:

We have highlighted many times this Government's failure to supply the Army with the kit it requires, but no failure is quite as unforgivable as the failure to provide the best possible medical services to soldiers wounded in the line of duty. It is shameful that British soldiers have died because the transport required to get them back to a military hospital is not available….

Whatever the political merits of ordering troops to fight in foreign wars, there can be no doubt that they should never be sent into battle without the logistical support to enable them to engage effectively, and to rescue and treat the wounded properly. Yet it appears that Tony Blair has done precisely that. It is true that he has not wanted to do it: he has frequently promised that military commanders will be given "everything they ask for". He has, however, been unable to deliver on that promise. It has remained an aspiration rather than a reality. British troops are dying as a consequence.

That chasm between aspiration and reality, between promise and delivery, is unfortunately all too characteristic of Mr Blair's time in office. It means that the abiding memory of his prime ministership will be of disappointment. It also means there are mothers who have lost sons, children who have lost fathers, and wives who have lost husbands because Mr Blair could not keep his promises.

Thus do we see the effects of the "framing". What starts as an account of a number of operational problems in Afghanistan, conveyed by an experienced officer with quite genuine concern for his troops, is turned into a political narrative, focused as an attack on the outgoing prime minister.

There is nothing of the complexity of the issue, no analysis of Parker's tantalising complaint of "too much middle management" – which is left hanging – and no attempt, whatsoever, to suggest solutions. In effect, we are simply invited to "hate" Blair.

If one takes the view that the media should be a force for good, then one must ask what this paper has achieved by its "framing". And one does not have to like Blair or agree with his politics to take his point when he describes the media as a feral beast.