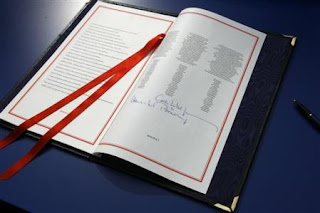 Helpfully, The Times puts up a link to Angela Merkel's "Report from the presidency to the European Council pursuing the treaty reform process". It concludes:

On the basis of its assessment of the positions of different delegations, the Presidency recommends that the June European Council agree to the rapid convening of an IGC. It suggests that the European Council give a precise and comprehensive mandate (on structure and content) to the IGC, thus allowing it to finalise its work on a new Treaty before the end of this year.

Thus, an IGC is to be convened, with a view to negotiating the treaty text, the target being a signing by the end of the year. Which is, of course, exactly what we said would happen. Yet there are people who still want to believe that Blair is going to Brussels to sign a new "draught" (sic) treaty.

Meanwhile, The Daily Telegraph is having to backtrack madly in its leader, making out that the IGC is somehow a new development, covering the tracks for its golden boy, Daniel Hannan, who confidently predicted that Blair was going to sign the treaty on 22 June.