The blogosphere comes of age 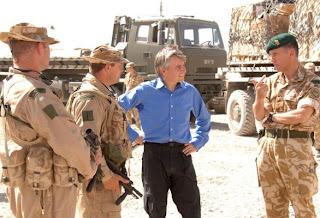 In what is a first for this blog, and probably a first for the British blogosphere, a serving minister has directed his department to make a formal response to a blog posting. This can be seen on our forum and is also posted on the MoD website.

The minister is Lord Drayson, defence procurement minister (centre of the picture), and the subject is our posting on FRES, which we published on 8 June in response to the announcement by the minister on the selection of three contenders for the FRES utility vehicle.

Such considered intervention deserves an equally considered response, the first part of which is here. I will deal with the specific, technical and related issues in a second post.

Firstly, then, on this day, the 25th anniversary of the Argentinean forces surrender to Major-General Jeremy Moore on the Falklands Islands, effectively ending the Falklands War, it is important to put this exchange in perspective.

Imagine, if you will, that when news of the Argentinean invasion had reached London, the then prime minister Margaret Thatcher had turned to her Admirals, Generals and Air Marshals and been told, unequivocally, that the military had neither the resources nor the capabilities to retake the islands.

That the military was able to launch a task force and eventually prevail – albeit on a wing and a prayer – was, in the final analysis, entirely due to thousands of decisions (good and bad) made by a myriad of serving officers and officials, approved by ministers and sanctioned by Parliament, all under the generic title of "defence procurement".

Without at least the basic kit, no amount of bravery, skill, commitment and dedication would have made the difference. We could not have recovered the Falklands. Think how that would have changed the history of this nation of ours.

A crucial point here was that most of the procurement decisions (and mistakes) were made years in advance of the event, in the absence of any definite prior knowledge of the specific threat, aimed in general at providing the Armed Forces with capabilities that would enable them to deal with the unknown.

So it is now. In the post-Soviet era, when hitherto the bulk of the our ground forces were committed to northern Germany in support of Nato, equipped and organised to deal with the threat of a Soviet land invasion, the Amy has to meet new, known and unknown threats, which may not materialise for ten, fifteen or even twenty years. And it is the decisions which are being made now, in terms of procurement and structure – the two being intimately linked – which will determine whether the Army will be able to meet those threats.

Here, we should be under no illusions. If today's decision-makers get it wrong, there could come a time in the future when a prime minister does turn to the military for a solution, only to be told that the capability does not exist – that the equipment provided all those years ago is simply not up to the job. Troops committed to the field would be either ineffective or, at worse, slaughtered.

That is the context of FRES – the Future Rapid Effects System. This is much, much more than a simple re-equipment programme. It embodies a complete restructuring of the bulk of the Army's fighting force, a redefinition of its tasks and the evolution of entirely new tactical doctrines. It is as General Sir Richard Dannatt, Chief of the General Staff, said (quoted on the MoD website): "at the heart of the future Army."

Now to the beef. While decisions related to FRES must, of course, be taken with the full involvement of the Army and the many technical services, they are too important and too far-reaching to be left solely to them, and the defence ministers directly involved. They are essentially political decisions and should be made only after the fullest debate, by politicians in both Houses of Parliament and in the public domain, the latter requiring the wholehearted engagement of the media, as only it can marshal a public debate.

There lies one of the most abject failures of both the political system and the media. Despite the importance of the issue, neither the government nor official opposition benches have thought to give time to debate this issue specifically. It has been left to one back-bencher, Lady Ann Winterton, to hold a Westminster Hall debate, attended only by herself, a hapless minister and the usual coterie of paid officials.

For sure, there has been a Defence Committee investigation – but one which did not look at the principles on underlying concept of FRES and which thus failed abysmally to perform its function.

When it comes to the media, the dereliction is equally evident. Quick to leap on real and imagined deficiencies of existing equipment in current use, the media has shown no serious interest in this major equipment programme. Its specialist defence correspondents (the few that remain) have been silent and the media in general has stood on the sidelines.

Yet, in years to come, politicians and media pundits will be among the first to criticise any deficiencies in equipment that might be deployed in some future field of conflict – full of hindsight and wisdom after the event. Of them, however, one might then ask, where were you when it mattered?

Thus it is that it has been left to this blog, and the staunch support of Christopher Booker in his Sunday Telegraph column – a newspaper within a newspaper – to raise the debate. It is to the eternal credit of Lord Drayson that he has responded to it. He too must share the frustration that vital issues of national security are given such short shrift.

And, as you might expect, we agree with some of the points he has raised. With others, we profoundly disagree. We will deal with these in Part II.