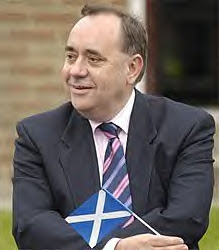 Hurrah! The world's problems are about to be sorted: peace will descend upon the Middle East, Hamastan and Fatahland will become friends, they will all stop attacking Israel and recognize its existence (or maybe not), Iran will become a liberal democratic state and eschew its nuclear programme on the grounds that it has a huge amount of oil that it is not, at the moment, capable of extracting or processing. And North Korea? Well, they will abandon all attempts to challenge the world and sign a genuine peace treaty with South Korea that will involve Kim Jong-il and his friends and relations being tried for crimes against humanity.

How do I know all this? Simple. According to this morning's Scotsman

Alex Salmond issued a clear challenge to Westminster yesterday as he declared Scotland would play a bigger role on the world stage under his leadership.

In his first foreign relations speech since becoming First Minister, Mr Salmond said he wanted Scotland to become a more powerful player than it has been for generations.

pledging the support of both governments to work together to try to secure better deals from the Westminster government on tourism, higher education, transport and the pursuit of a cut in corporation tax. They intend to involve the Welsh administration once the shape of that organisation becomes clear.

This, apparently, is the beginning of Scotland and Northern Ireland becoming a force or, maybe, two forces in the world: asking for more money from the poor benighted English taxpayer. It is at times like this that I begin to appreciate the arguments in favour of an English parliament, though I remain at heart a Unionist.

Anyway, so far Alex Salmond, temporary leader of the Scottish Assembly (his share of the vote is considerably less than overwhelming) has not said anything of any interest on his ideas for foreign policy, beyond pointing out that the Nordic countries have an alliance and it has a certain clout in the world. Of course, the Nordic countries pay for their own alliances and diplomatic services.

One assumes that is at the heart of this and subsequent statements. Scotland wants its own diplomatic service and its own negotiators. Who will pay for this? Need you ask?

Mr Salmond accused Tony Blair, the Prime Minister, of ignoring Scotland by signing a memorandum of understanding with Libya on prisoner transfer and his ministers have started talks with London counterparts in a bid to secure more power and money from Westminster.

The curious aspect of all this is that ever since devolution Scotland, in the past a country whose eyes were on the world, has become considerably more inward looking and parochial. The Scotsman is a case in point. It used to be a newspaper that wrote about many matters in the United Kingdom and outside it. Most of its headlines now have to do with Scotland. Not even the rest of the country.