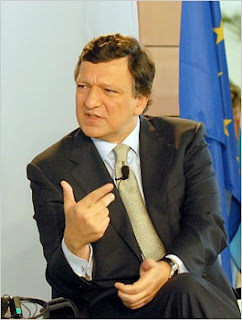 Speaking in Brussels today at the third Joint Parliamentary Meeting on the future of Europe in the EU parliament, el presidente Barroso has warned of the "negative consequences" of not reaching an agreement on the forthcoming treaty. "I hope that all member states from the old to the new do not introduce new factors of division," Bloomberg reports him as saying.

Reuters has him saying a whole lot more, apparently appealing to Britain and Poland "to show political courage and compromise" on the new treaty, with the "negative consequences" transmuting into "very negative implications". At risk, according to el presidente is the EU's single trade market, solidarity among member states and economic cohesion.

"In the end we need political leadership, and I think the message that comes out of this is a strong plea to member states to work in a sprit of compromise," he is reported as telling a conference of European and national parliaments.

Not seen in the media reports, however, were some more comments, which were quite understandably leapt upon gleefully by UKIP. According to their version Barroso addressed some of his remarks directly to Blair, telling him to, "Stand up to popular opinion" and "ignore popularism" in order to push ahead with the new treaty.

Apart from a robust response from UKIP (via England Expects), this also brought a rebuke from Labour MP Michael Connarty, who told the gathered colleagues to: "Stop lecturing us about how we should come to your position," urging them to appreciate Blair's "Herculean efforts" to bridge the gap between constitution supporters and those countries that were unable to support the text.

This, however, according to the IHT, is not Barroso's concern. Reviving parts of the rejected constitution could spawn a public backlash, he agrees, but "failure to implement institutional reforms would be worse".

Therein lies the gulf. Clearly, for the colleagues, "public backlash" does not count in their litany of "negative consequences" when they are contemplating their precious treaty. And that, with utmost clarity, demonstrates why the EU is not in any way a democratic organisation.