On the treaty trail 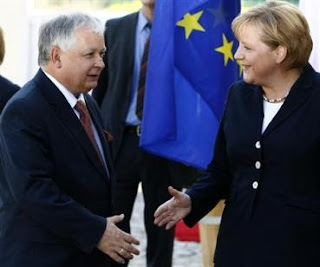 All the "quality" Sundays give space to the EU treaty saga today, although there is very little that need detain readers looking for information.

For instance, one almost weeps with frustration at the utter pig ignorance of The Sunday Times, which headlines its front page: "Blair to do deal over EU charter".

Two of the paper's finest, Isabel Oakeshott and Nicola Smith, then blithely tell us that, "Tony Blair is preparing to cave in to pressure to sign up Britain to a sweeping new human rights charter… this week amid fears that plans for a treaty to replace the failed European Union constitution will collapse if he refuses to compromise."

"However," the pair continue, "Downing Street is pessimistic about the general prospect of a successful outcome to the EU summit, starting in Brussels on Thursday."

It would help, of course, if these hacks got their terms right. Blair is not attending a "summit" – he is attending a meeting of the European Council. That is an institution of a European Union, which cannot agree a new treaty, as this is agreed by individual member states acting in their own name.

All the European Council can do is convene an Intergovernmental Conference (IGC), which is exactly what Merkel is going to propose. The summit (of the IGC) will, if everything goes to plan, be held towards the end of the year, at which point – if all 27 member states agree – a new draft treaty will be signed. There is, therefore, no reason for Blair to "cave in" and "sign up" Britain to anything next week. There is no treaty on the table and nothing to sign.

Needless to say, the drivel continues on the inside pages, with Isabel Oakeshott and Nicola Smith joined by David Smith, telling us that what Britain agrees to sign up to will do much to determine the success or otherwise of Brown's first year in office. "More than that," write the terrible trio, citing critics, "it could go down in history as a crucial juncture in the development of a European superstate."

But, of course, as we are earnestly told, "Britain's fate will be firmly in the hands of Tony Blair…".

The Sunday Times does, however, offer us a YouGov poll – the only thing of any value in the paper on EU issues – which has 17 percent in favour of Parliament deciding on a treaty, 70 percent for a referendum and 13 percent "don't knows". On voting intentions, 21 percent would vote for, 43 percent against, three percent would not vote and there is a massive 33 percent "don't knows".

As for The Observer, Nicholas Watt writes under a headline, "Anglo-French cordiale sets the scene for EU deal" and has Sarkozy "ready to endorse Blair's demands in Europe". This is a move, writes Watt, "that may finally pave the way for agreement on replacing its constitution".

Giving us exactly the opposite line from The Sunday Times, Watt then proceeds to tell us that Blair has agreed with Sarkozy an opt-out on the Charter of Fundamental Rights, and also on keeping the veto on criminal justice matters.

That is enough of the Observer though, which brings us to The Sunday Telegraph and Patrick Hennessy, flying solo.

Blair, under pressure to announce a referendum, is saying (according to Hennessy) that securing a deal on a successor to the EU constitution that can be "sold" to British voters without holding a referendum will be "diabolically difficult". But he (Blair, that is) believes he can realistically bring back opt-outs and sub clauses designed to protect Britain's "red line" issues. Right, thank you Mr Hennessy.

Nothing need then detain us in The Independent which has nothing to offer that you have not already read on this blog, which brings us finally to Reuters. Of substantive news, we get from the agency that Merkel has failed to win over Poland in talks held yesterday with Polish president Lech Kaczynski (pictured), in Berlin. Now, there's a surprise.

What also isn't a surprise is how desperately ill-informed readers will be if they rely on British newspapers – but then, what else is new?