The hunting of the constitution 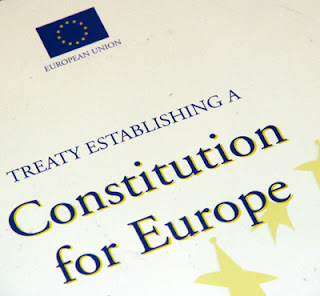 Jens Peter Bonde (or his team) has been hunting out politicians crowing about the rescue of the EU constitution.

Thus, to add to the trawl, we have a whole galaxy of EU parliament notables.

First, we have Alexander Stubb who says, "We have salvaged 99 percent". Stubb is the Finnish conservative, co-coordinator of the biggest political group in the EP (EPP-ED), and former civil servant participating in three different intergovernmental conferences.

Jo Leinen, Chairman of the Constitutional Committee (PSE), crowed: "We kept the substance of the Constitution", Enrique Barón Crespo (also PSE), declared, "We have the same thing, but we regressed for transparency and clearness," and the Green, Gérard Onesta, happily chortled, "It's incredible to see all what they slipped under the carpet!"

Carlos Carnero (PSE) was slightly more guarded: "Formally, it's not a constitution,” he said, "but it's a big step towards the constitution." The great guru Richard Corbett (PSE), ventured: "Technical reforms and democratic reforms have been rescued." And another Green, Johannes Voggenhuber, vice-chairman of the Constitutional Committee, pronounced: "Our political union finally has a Constitution!"

He was joined by (French) Liberal, Jean-Louis Bourlanges, who told the the radio programme "Esprit public", "All the Constitution is there! Nothing is missing!"

Meanwhile, picked up by England Expects is a startling intervention by Jacques Delors, possibly – says EE - the most infamous (and effective) centralising European Commission President.

He has come out in favour of an EU referendum in France. Speaking to France 1 radio (Reported by AFP) he said, "If I was an MP today I would "vote in favour of the compromise", but he is a "supporter of a second referendum to clarify the positions and to ensure that the opposition does not stiffen".

Another mad Frog has also intervened, none other than Valéry Giscard d'Estaing. As author of the original EU constitution, he has, according to The Telegraph confirmed that the negotiating mandate agreed in Brussels was a revival of the old constitution. Also confirming other comment, he added that it had simply become more "complicated".

This is actually on his blog, where we writes: "This text is, in fact, a rerun of a great part of the substance of the constitutional treaty."

And finally … the fragrant Margot Wallström has told a Swedish paper, "It's essentially the same proposal as the old constitution." She was slightly more coy in her official statement but her unofficial pronouncement was backed by the commission's legal service, which helped in the drafting the text. "For the commission the key goal was to save as much as possible from the 2004 text. On reading and rereading the new text, one can safely conclude that most has been preserved," an official said. "The essentials have been retained."

But hey! It's just an amending treaty.