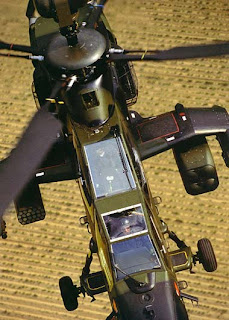 For those that are interested, one of the premier international air shows is under way, the Paris Air Show. For those that aren't, this is a venue where all sorts of interesting announcements and statements are made.

Not least is one, reported by The Financial Times by Bob Stevens, chief executive of Lockheed Martin, the world's biggest military contractor. Warning against the attempt by European governments to build a joint defence industrial base to counter US dominance, he told them their ambitions were "unaffordable" and that they encouraged "more protectionist elements".

He added that it made sense for European countries to harmonise military equipment needs, but warned that attempts to establish an industry with a distinct European identity were a "step backwards".

This was in response to a drive by the member states of the EU, through the European Defence Agency, to set up a strategy for a European Defence Technological and Industrial Base (DTIB), which was announced by the EDA in May of this year. It was described at the time as "a fundamental underpinning of Europe's security and defence policy", setting in train "a series of practical steps to achieve their vision of a more integrated and competitive future."

Emphasising the political framework of the venture, Javier Solana, the Head of the EDA – and putative EU foreign minister – told the launch press conference that, "We must have a shared view of which are the priority capabilities, which are the key technologies for our future and which are the vital industrial capacities we must develop and retain in Europe."

Stevens, at this week's Air Show, said he welcomed such moves but was troubled by some of the language in the EDA strategy, including arguments for "lessening Europe's dependence on so-called non-European sources for key technologies", a statement aimed directly at the US. "We need a global industrial base and a global supply chain to make sure we have access to the best technology," he said.

This statement, of course, can be dismissed as the action of a US defence conglomerate trying to defend his own turf. However, also announced at the Paris Air Show was a decision by the French government to equip its Hélicoptère d'Appui Destruction (HAD) Tiger attack helicopter fleet with the Hellfire II missile system, built by Lockheed Martin.

This is in preference to the European collaborative project, the Trigat LR which was initiated in 1988 between France, Germany and the UK, specifically to develop a missile to equip the Tiger helicopter. Belgium and the Netherlands joined the consortium as associate members 1989 but, in July 2000, the UK was forced to withdraw from the programme, after the missile failed to perform. It lost £205 million in the process. The UK was followed in the September by the Netherlands.

The French decision to buy the Hellfire, therefore, amply illustrates Bob Stevens's warning. Consistently, in the high-technology defence stakes, European defence industries have failed to deliver, while the US is spearheading multiple new technologies (and developments of existing technologies) which are leaving the Europeans floundering.

The dangers of the "little Europeans" pulling up the drawbridge on "fortress Europe" and reinventing the wheel with a European label, therefore, is one to which Stevens is right to draw attention.