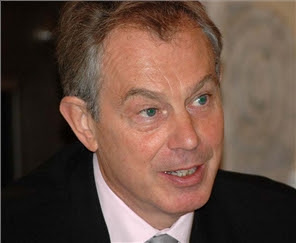 With Blair scheduled to make a Commons statement at 3.30 this afternoon, the attempt at damage limitation is in full flow, with the Labour-supporting Daily Mirror.

Headlined, "I didn't surrender sovereignty", with the strap, "Blair: I didn't give away any powers at EU summit", the Mirror's political hack, Rosa Prince, thus previews the prime minister’s statement, telling us that Blair will tell MPs today, "he did not surrender any of Britain's sovereignty in last week's European treaty negotiations."

The line will be the narrative developed during the post-Council press conference. He will insist he did not give way on his "red line" negotiating positions on policing, justice, tax, welfare, labour laws and foreign security issues, with the fair Rosa then offering the view that Gordon Brown, "will be hoping that Mr Blair's performance is strong enough to see off Tory calls for a referendum over the Reform Treaty".

Compare and contrast with The Daily Telegraph leader, headed: "We won't be fooled out of our referendum" – ("bamboozled" in the print edition). It declared of the agreement:

This is worse than we expected. We had assumed that, in order to sustain their line that their new treaty was different from the constitution, British ministers would have to rewrite some parts of the draft. In fact, the two texts are virtually identical. Titles have been altered, terminology tweaked, but there have been no substantive changes.

This is, to all intents and purposes, the same text that was rejected by 55 per cent of French voters and 62 per cent of Dutch voters two years ago - although you would not know this from listening to the BBC's gullible coverage. The changes are emendations, not amendments; decorative, not structural.

There, for once is the political divide, writ large. The Boy Dave will be answering the prime minister for not very much longer, and this will be his opportunity to stake his claim for the high ground on the "treaty" agreement.

Already under attack for failing to raise the issue during a television programme over the weekend, a great deal will rest on whether he can raise the political stakes sufficiently to keep the "Europe" in the news.

Unfortunately, the political drama queens are already chasing after the prospect of an early general election and, whether an intentional ploy or not, this is certainly having the effect of driving the referendum campaign off the front pages.

As Blair – presumably with the assent of the soon-to-be leader, Brown – tries to play down the significance of the Brussels agreement, there is a great deal to play for.