The same in Spain 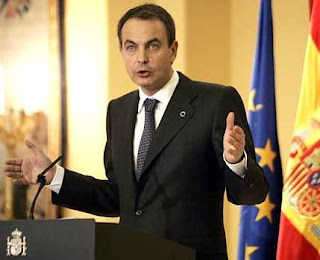 Jose Zapatero, the Spanish prime minister, joins the growing list of EU politicians who is claiming that the EU constitution is back, arguing that, "A great part of the content of the European constitution is captured in the new treaties. Everyone has conceded a little so that we all gain a lot."

He is backed by Diego Lopez Garrido, the parliamentary spokesman for the Spanish Socialist Party, who says that, "99 per cent" of the original constitution had survived,” going one better (nine percent, actually) than Bertie Ahern, the Irish premier.

A similar view prevails in the EU parliament where, says The Telegraph, there was almost an air of celebration. Our stage German, Elmar Brok, the chairman of the parliament's foreign affairs committee, hailed the agreement, proclaiming: "Despite all the compromises, the substance of the draft EU constitution has been safeguarded."

Brok is at one with Hans-Gert Poettering, president of the parliament, who told the Council of Europe in Strasbourg that while a proposed anthem and flag had been dropped, "the substance of the constitution has been retained".

This meshes with Merkel's comment in the aftermath of her "victory" in the small hours of Saturday, when she declared that "The fundamentals of the constitution have been maintained in large part."

On the home front, The Telegraph tells us that Michael Carpenter, legal adviser to the Commons European scrutiny committee, is in agreement with this growing "consensus". Legal advice prepared by him for MPs points out that, "it appears that all the significant changes made in the constitutional treaty have been reintroduced in one form or another".

The crazy thing is that Blair is also right. What is intended to emerge when the IGC goes to work on the "mandate" is indeed an amending treaty. It will amend the existing treaties ... turning them into the EU constitution in all but name. And, since Blair agreed the same document as Zapatero, it is the same in Spain.