Trailing in their wake 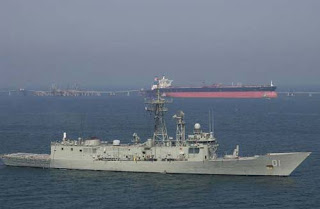 It is an interesting reflection of the self-regarding nature of the modern media that, when the BBC picks up something that has been on the net for several months, it can still pompously assert that "the BBC has learned". To the likes of this dire organisation, nothing is "news" until it says it is. The MSM alone are the guardians of all knowledge and the fount of all wisdom.

Thus it is that the BBC's Frank Gardner, styled as the "BBC News security correspondent" – there's glory for you – broke the news to the waiting world yesterday that "Iranian naval forces in the Gulf tried to capture an Australian Navy boarding team but were vigorously repelled".

However, Gardner is short on detail – he does not know when this incident happened, other than "it took place before Iran successfully seized 15 British sailors and Marines in March."

Had this self-important hack looked at Michelle Malkin's admirable Hot Air site on 27 March, however, he would have found a much more detailed account of the incident, the only error being that it had been attributed to the Royal Navy rather that the Australians. But since the report was from an American servicemen, that is entirely forgivable.

If looking at US websites gives Gardner a nose bleed, he could have referred to EU Referendum as we put up a link on the day the report appeared and then reproduced the post on 6 April. 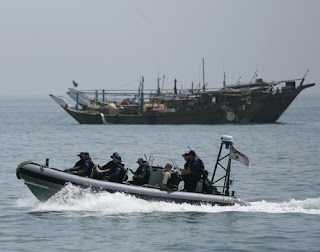 Although the Hot Air report was a little vague on the precise date, suggesting December 2004 or January 2005, an Australian report puts it firmly in December 2004. From that, we are able to identify the ship, as the only Australian vessel out there at the time was HMAS Adelaide, an escort frigate (pictured above left).

The immediate implication of this is the obvious ones, as articulated by the fabulous Gardner – and by us more than two months ago – as to whether lessons had been drawn from what happened to the Australian crew. Another important issue – which Gardner does not address – is whether Lt. General Fulton knew of this incident, and whether he factored it into his report – and, indeed, whether it would have made any difference to his findings.

There is, though, a broader issue. If nothing else, this demonstrates the primacy of the net – and particularly blogs – in ferreting out information and getting it into the public domain. It also means that there is a growing constituency of people – ordinary people – who are better informed than the media, and are not reliant on them for their "take" on an increasing range of issues.

As yet – certainly in the UK – the effect of this is probably not measurable, as there is a bovine lethargy in the British population, which still prefers to be spoon-fed by the MSM. But for those with an independent frame of mind, the information is out there if they care to take the trouble to find it. And they will leave the MSM trailing in their wake.