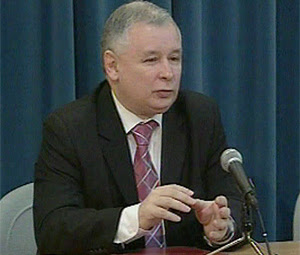 A spread of the media is telling the story of how Poland, to the fury of the "colleagues", is demanding to re-open the debate on the "mandate" agreed at the European Council meeting last week. The issue, rather predictably, is voting rights.

First out of the traps is Deutsche Welle which, like so many of its contemporaries, conditions its report by referring to "treaty negotiations".

The interesting thing about its report, though, is that – undoubtedly unwittingly - the paper awards a quite undeserved authority to two institutions, the EU parliament and the commission.

First, it cites the German president of the parliament, Hans Gert Pottering, who calls the new Polish demand "totally unacceptable," while it has commission president Barroso urging all governments "to respect the deal".

This, in a very real sense, is lèse majesté. These institutions, as part of a treaty organisation are, in theory – and international law, if you care to rely on it – subordinate to the nation states.

What they are doing is denying the right of an independent sovereign state to negotiate its own terms at an intergovernmental conference, which will define the powers of these (theoretically) subordinate institutions. This is borne out by the context, where Jaroslaw Kaczynski is saying, of his country's voting rights, "We have to finally resolve this issue at the Inter-Governmental Conference."

Whatever one's view might be of the Polish case, the one certain thing is that Kaczynski has the perfect right to insist on negotiating it at an IGC.

Despite this, the fiction of the primacy of the "mandate" is reinforced by Portuguese prime minister José Socrates, who in the insolent way of the "colleagues", called Kaczynski's comments "a misunderstanding." He declares, with a complete disregard for international law, "The mandate is very clear and precise on what has to be done."

For the best example of lèse majesté, however, one has to go back to the EU parliament where Martin Schulz, head of the Social Democrat group, splutters, "I just can't believe it … You can't question what was agreed upon after such a dramatic summit." Ah, but you can, Mr Schultz, you can.

Nevertheless, we get the same sort of confusion from the IHT. It has Jaroslaw Kaczysnki making "a display of defiance". Why a nation state exerting its rights under international law should be considered "defiance" is not explained.

In this report, the IHT gives more space to Barroso, citing him saying that some adjustments to the treaty could be discussed but, "nothing that would contradict the agreement that was unanimously obtained." There we have it again, lèse majesté writ large. What a nation does at an IGC is none of your business, Mr Barroso.

But the commission has never been bothered by such niceties. It also fields its spokesman, Pia Ahrenkilde Hansen, to pronounce that the voting issue was closed, adding, with the arrogance of office to which one has become accustomed: "This was clearly settled last week. A mandate is a mandate and a deal is a deal. Now is the time for the intergovernmental conference to finish its job."

Hans-Gert Pöttering also gets another bite of the cherry and, in this report, he opines that the Polish proposals contradicted the agreement reached in Brussels. "If so, it would be totally contradictory to what has been agreed in the summit in Brussels and it is totally unacceptable," he adds.

Reuters via The Washington Post contributes its own brand of confusion, offering an opinion from Pawel Swieboda, an analyst at Warsaw-based thinktank DemosEuropa who tells us that, "This is an invitation to another disaster. Poland will lose its credibility because it is one thing to fight for your interests and another not to keep your word."

Helpfully, the online journal jurnalo.com gives us its "take", recording that a commission spokesman was asked whether "the binding force of EU summit decisions could be questioned". As happened when Blair was asked a similar question, the reply was fudged. "The normal effect of summit decisions and a mandate is clear," was the answer. They really do not want to deal with this one.

That leaves AFP which follows the party line, then defining the IGC for the unknowing. It "is likely to meet regularly over coming months to try to iron out the 'reform treaty's' remaining details," says the agency, thus casting it in the preferred role as a drafting committee.

Thus are relegated the leaders of the once mighty nations of Europe – to the status of clerks serving the mighty machine of the European Union. And no one even seems to have noticed.