A constitution in drag 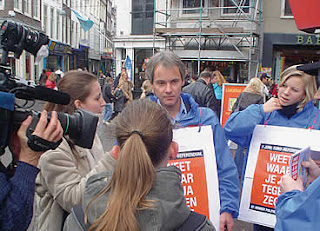 It seems the Dutch "no" campaign isn't buying it either. Harry van Bommel of the Socialist Party (SP) is, according to Reuters, via Javno.com, dismissing the European Council "mandate" as a "constitution in drag" and is demanding a referendum.

Jan Peter Balkenende, the Dutch prime minister - in common with our own - has presented the deal as a victory, only he says it is a victory for the Netherlands. But he has not yet declared whether he would put it to the electorate or to parliamentary ratification.

Harry van Bommel (centre of pic), whose party saw a big increase in support in last November's election partly as a result of its stance against the EU constitution, is therefore pushing for another referendum to be held in early 2008.

As regards the agreement, "It still has many constitutional aspects... all they took out were the symbols and that is not what bothered most people," says Van Bommel. "Simply by calling it a charter (treaty) does not mean that it loses its constitutional qualities."

The Dutch MP has been voluble in the build-up to the European Council, as recently as May declaring that removing a number of symbols, such as the European flag and anthem, with a name change, was no more than "a straightforward sleight-of-hand trick". Then he was saying, "the European Constitution is being smuggled in through the back door, disguised in a new dress."

It looks like Mrs Merkel's attempted coup d'etat might be in for a rougher ride than she expected.