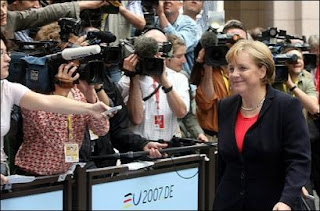 It really is terribly unfair on the print media that these EU "summit" negotiations go on way past their bedtimes, which means that most of the newspapers hitting the streets are already out of date.

As it stood just before midnight, however, the Poles were holding out for a deal on voting rights, while Merkel had proposed a vote on the IGC, invoking the Milan option of a majority vote. The idea was to produce a mandate of the 26 other countries, inviting Poland to join the talks.

Next we heard that this idea had been ditched in favour of another attempt to seek a compromise with Poland, leaving the fate of the European Council very much in the air.

Then, according to The Times, bang on midnight, "a draft treaty was agreed" when the Poles accepted a compromise that will be phased in from 2014 to 2017. We have no news as yet as to whether the horses turned into rats, the coach into a pumpkin and Merkel's clothes to rags.

Anyhow, the drama has played out right to the end, to its predictable conclusion. All we need now to see is the statement from Blair, telling us what a good deal it all is for Britain (we don't need a referendum, honest guv!), and we have a full house.

Then, with the fun and games over, our work will start, as we look at what the "colleagues" have actually agreed, and where they've sold us out.