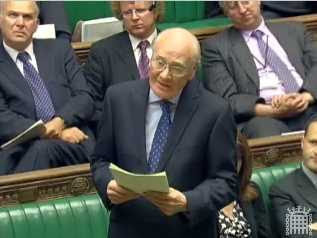 Try these extracts from the debate following the prime minister's statement on the European Council:

Sir Menzies Campbell (North-East Fife) (LD): Are any of the issues contained in the mandate to the IGC capable of being reopened, or is the mandate the final word on what can be discussed at the IGC?

The Prime Minister: The detail of what was agreed obviously has to be negotiated at the intergovernmental conference, but the key elements have been agreed.

Notice how Blair does not answer the question: "Are any of the issues … capable of being reopened?" Instead, he says, "the key elements have been agreed", but we know this already. Can they be reopened? Of course they can, but Blair does not want to admit this.

Now look for a different technique:

Mr. Austin Mitchell (Great Grimsby) (Lab): I wonder whether my right hon. Friend can help me. Surely we are talking not about a treaty but about a discussion in the Council of Ministers, which is a treaty organisation and therefore cannot negotiate its own treaties. In fact, a new treaty is the responsibility of the IGC, and that works on the basis of unanimity, not the simple majority voting of the Council of Ministers. So we now have a situation in which we can, and in my view should, still veto the whole unnecessary business. More importantly, can my right hon. Friend tell us how, assuming that the treaty pops up in October, we in this House can discuss it and decide on it before the IGC?

The Prime Minister: There will of course be ample opportunity, through the ratification process, to have a full debate on it. Why would we want to veto this treaty? It provides the means for a more effective working of the European Union. Let us be clear about this: my hon. Friend, and some Opposition Members, would call for a referendum even if we added a comma to the constitutional treaty, because what they really want is to take us out of Europe, and they might as well be honest about it.

Austen gets the "Council of Ministers" wrong – he means European Council, but never mind. The key is that he asks a two-part question. So, what does Blair do? He answers the second part and ignores the first, adding a political jibe to get a reaction from the House and thus divert attention from the fact that he hasn’t answered the question fully.