Elsewhere in the world 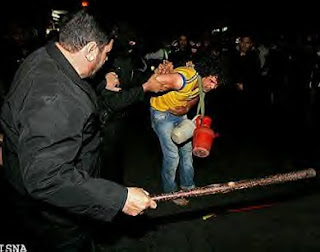 So engrossed have we been by the enthralling saga of the "mandate" and the constitution that is now just an amending treaty that we are two days behind on mentioning what has been going on in Iran, where it seems police has been cracking down on people in the streets of Teheran with some brutality.

Two days ago the New York Times published an article about the behaviour of the Iranian police towards people accused of "treason", which frequently amounts to very little more than wearing western style clothes.

Iran is in the throes of one of its most ferocious crackdowns on dissent in years, with the government focusing on labor leaders, universities, the press, women’s rights advocates, a former nuclear negotiator and Iranian-Americans, three of whom have been in prison for more than six weeks.

The shift is occurring against the backdrop of an economy so stressed that although Iran is the world’s second-largest oil exporter, it is on the verge of rationing gasoline. At the same time, the nuclear standoff with the West threatens to bring new sanctions.

We must not forget that at the same time Iran is spending a great deal of money on arming and financing Hezbollah in Lebanon and Hamas in Gaza.

The blogs across the United States published the story of the police behaviour as well, with numerous rather unpleasant pictures. Here is an example on Michelle Malkin's blog, complete with rather robust challenges to many who spend a lot of time not talking about the realities of life in Iran, such as the American branch of Amnesty.

Yesterday, the New York Times apologized (same link). It seems that they have been told by unimpeachable sources from the official Iranian media that the people being beaten up were, in fact, all criminals of the darkest hue. Glad we've got that sorted. Presumably the bit about economic problems was all wrong as well. Under the Mullahs, as under Stalin, life has become better and happier.