Was it Fatah al-Islam? 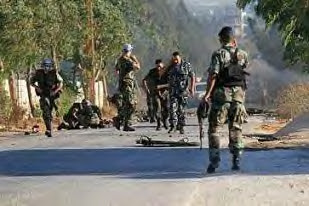 While the fighting in northern Lebanon between the army and the terrorist organization Fatah al-Islam continues and, indeed, seems to be spreading, the latter or, possibly someone else, has turned its attention to the south.

A bomb has killed three Spanish and three Colombian soldiers in UNIFIL. Two other soldiers have been wounded. The Spanish Defence Minister, Jose Antonio Alonso said:

We are working on the theory of a terrorist attack. In the last few weeks there have been many incidents which have destabilised Lebanon. We were on high alert and we had stepped up security.

It is, of course, possible that the Spanish government will think of pulling the troops out though that is unlikely to be popular with the troops themselves.

Meanwhile everybody or almost everybody in Lebanon has condemned the attack and UNIFIL has pointed out again that it is not involved in the fight in northern Lebanon so would Fatah al-Islam, please, leave them alone.

The attack hurts the people of the south and of Lebanon.

It certainly does, though probably it hurt the soldiers in question a bit more.
Posted by Helen at 10:43