You do have to wonder 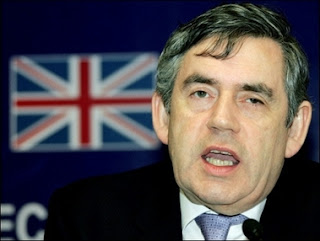 Looking at the joint article by those great political thinkers, George Jones, Rachel Sylvester and Alice Thomson, in today’s Daily Telegraph, entitled “Brown attacks blunders over war in Iraq” I could not help asking myself who is displaying total ignorance. Is it our future Prime Minister or those leading hacks?

Disregarding Brown trying to gain some credibility over the war in Iraq (though, I note, he does not mention the subject of British interests either) one moves onto the promises the man has allegedly made for the first 100 days of his rule.

In another clear sign of a break from the Blair years, The Daily Telegraph can disclose that Mr Brown will announce the creation of a people's assembly to rewrite the constitutional settlement as part of a blizzard of initiatives to mark his first 100 days in office.

The public will be invited to help write a new Bill of Rights to try to show that Mr Brown as prime minister aims to give more "power to the people" and reduce central Government control as he did when he handed independence to the Bank of England in 1997.

Mr Brown's allies also let it be known last night that he will block any plans to revive the European constitution rather than give up the British national veto over key policy areas including justice and home affairs.

He will fight moves to sign away powers that would allow the Tories to justify calling for a referendum in the run-up to a British general election. Mr Brown believes such a referendum would be lost.”

A people’s assembly? To be created in the first 100 days? What kind of an assembly, elected, non-elected, appointed by the Prime Minister? Or will this be another example of organized society? How is such an assembly to be created without parliamentary legislation, which takes a bit longer than 100 days? Oh wait, do we not already have a people’s assembly and is it not called parliament? Why do we need another one?

About that new Bill of Rights. The public can help to write it but does the public know that a good many of those Rights are now EU competence? Come to think of it, does Mr Brown know that or Mr George Jones or Ms Rachel Sylvester or Ms Alice Thomson?

Then there are those vetos over justice and home affairs. Does Mr Brown recall a certain incident in the last general election during which the Leader of Her Majesty’s Opposition was slapped down by the European Commission when he promised to change immigration rules. He was told that these were no longer the British Government’s to change and the word Tampere was mentioned.

May I suggest to our future Prime Minister and the political sages of the Daily Telegraph that they have a look at the two Tampere agreements and the long list of matters pertaining to justice and home affairs over which we no longer have a veto. Now that I think of it, the Leader of Her Majesty’s Opposition might profitably spend some time on those Agreements as well.

Failing that, they might like to read an excellent House of Lords Report on "The Hague Programme: a five year agenda for EU justice and home affairs". It will be quite an eye-opener.