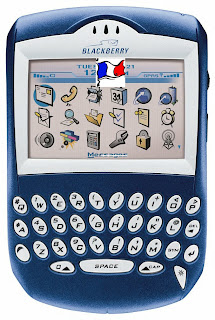 It is always a pleasure to look at stories coming out of France and, in particular, stories of French paranoia. Take the saga of the French blackberries. No, not the ones you pick and put into pies but the ones you can pretend to send e-mails from. In fact, it is really a BlackBerry.

According to Le Monde, French government officials were told to leave their BlackBerrys alone because information sent out on them might be picked up by the United States National Security Agency, as the servers for the BlackBerry e-mails are located mostly in that country.

This is a truly fascinating idea. Do these people know just how incomprehensible most messages sent from BlackBerrys are? If the NSA or, for that matter, the CIA can decipher what the French officials write to each other on those pesky hand-held machines, they are better men (and women) than most of us.

The dissident frogman, who is back on message thankfully, mentions another interesting aspect of this ludicrous story. Referring to a comment by Alain Juillet, a senior French economic intelligence official, that interception might lead to economic war, the dissident frogman says:

The risk to French economy is real indeed.

We can't let the Yanks learn how to screw their middle-class as well and deeply as we screwed ours, and bring it down to the level of America's lower class and below.

We can't let the Yanks learn how to boost their unemployment figures from full employment to structural and sustained (like, 30 to 40 years) 10% to 20% unemployed, particularly when, if you see past the sexed up figures, it's more likely around 22 to 25%.

We can't let the Yanks learn how to destroy their economy, marketplace and workforce as well as we destroyed ours - and we can't let them know our many times proven tactics of State control and meddling with every sectors and aspects of our economy.

We can't let the Yanks learn our state of the art techniques of bribery, corruption, State Capitalism a-la-Russe, nepotism and back-scratching, and total collusion between private and public interests in the conduct of said economy.

We can' let the Yankees learn how to target effectively their best and brightest, and either tax them to death or price them out of the country. Furthermore, since many of them went to America, they wouldn't know where to go next — and you can only pack so many entrepreneurs and rock stars in Switzerland anyway.

And so on. You get the idea.

Mind you, the campaign to take away the BlackBerrys has collapsed, anyway, as the officials rebelled, announcing that no substitute was as good. I have to say, I am rather puzzled by this prevalence of BlackBerrys in France. Surely it is the hated tool of the workaholic Anglo-Saxes, who do not know how to enjoy life but have to keep working in and out of the office. Mon Dieu, do not tell me that the French have succumbed to the disease!

Something else the French seem to have succumbed to, as soon as it was possible to do so and that is political blogging, in order to disseminate information about their politicians. Hitherto, they mostly turned up their noses at the Anglo-Saxon “obsession” with politicians’ private lives.

We, in France, they would say with a Gallic shrug, do not care about such matters. They happen, naturellement, but we are too sophisticated to worry. Sadly, it appears that the reason the French public paid no attention to their leaders’ private lives was because information was suppressed in the main stream media.

That has now changed with blogs. An article in the Sunday Telegraph tells us in some detail that the Royal – Hollande split that has enthralled the French public for weeks, was first discussed on the blogs. Similarly the never-ending soap opera of the Sarkozy marriage, accounts of which have been suppressed in the past by the then Minister of Interior, now President, is avidly read on French-language blogs by all.

Hmm. It would seem that the French react to political and economic circumstances much like everyone else does, given half a chance.

It seems that the French blogosphere is well on the way to changing the political scene in France and give the MSM a good kicking. Yet the British blogosphere and its readership appears to go on kow-towing to the main stream media and the political elite. How is that possible?