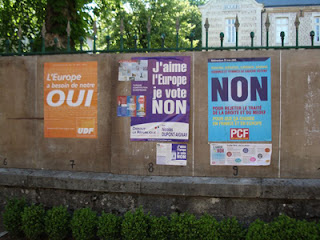 We're going to get a lot of this in the next week or so ... perhaps lasting even longer – the vexed question of whether there will be a referendum on any new EU treaty.

For the latest twist, according to The Guardian, Europe minister Geoff Hoon has said Brown could do the deed and permit one, if the EU leaders agree significant constitutional changes.

This was on the BBC Radio 4's The World This Weekend, when he told the BBC, "Clearly a judgment has got to be made in terms of what is in the final package."

Foreign secretary (in name only) Margaret Beckett, however, is sticking to the line that the deal will be an "amending treaty", the British line remaining, "We do not want to see a constitutional treaty or a treaty that has the characteristics of a constitution." This is only to "tidy up the rule book…".

Have we heard this before?

Meanwhile, the Financial Times is telling us that, according to an exclusive FT/Harris opinion poll, a reworked EU constitution without further referendums is strongly opposed by "European citizens".

That includes countries such as Britain, France, the Netherlands and Poland. A total of 75 percent of Spaniards, 71 percent of Germans, 69 percent of Britons, 68 per cent of Italians and 64 per cent of French believe the treaty important enough to warrant a referendum.

However, the poll also indicates that many citizens of the EU member states remain only dimly aware of what they might be asked to vote on. Spain, which voted "Yes" to the original constitution, was most aware of it (77 percent), while that figure fell to 54 percent in Germany. Only 45 percent in the UK claimed awareness. Some 55 percent said they had heard only the constitution's name or had never heard of it at all.

The British were, nevertheless, clear on one thing. They do not want a full-time EU president. Only 14 percent supported the idea – although 41 percent went for the idea of an EU foreign minister.

Would you call that a mixed bag?