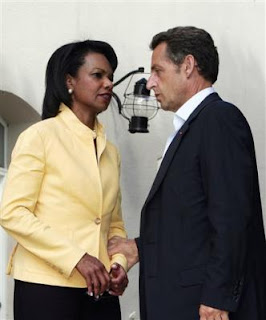 "Britain has been strangely absent from the Russo-Georgian conflict," proclaims the leader in The Daily Telegraph. "To the extent that we have had anything to contribute, we have contributed it through the Council of Europe and the EU", it continues. "We have, in other words, been represented by Nicolas Sarkozy. And while the French president has admirable qualities, his interests are not identical to Britain's."

Well, blow me down with a feather. What were we writing yesterday? And now The Telegraph has actually noticed that, when it comes to our foreign relations with Russia, we defer to the European Union, relying on Mr Sarkozy, in his role as (temporary) president of the EU.

Waking up from its deep sleep, the paper then intones, "The truth is that a common European foreign policy is already upon us. Britain could no more act unilaterally in Georgia than in the World Trade Organisation."

You don't say! Really! But for the stunning intelligence of the Telegraph leader writers, we would never have noticed. How grateful we should be that they are really on the ball and picked this up, especially when they tells us that, "The EU has a foreign minister, Javier Solana, and an accompanying diplomatic corps, known as the European External Action Service."

Go to any non-EU country, they tell us, and you will find an EU mission alongside national embassies. Then they have the nerve to tell us: "The debate about whether or not there should be a common foreign policy is being conducted decades too late."

Er … And why is that? Why is it that, as the EU's Common Foreign Policy has developed, through Maastricht, through Amsterdam, through Nice and now extended via the constitutional Lisbon treaty, there hasn't been a debate? Could it just be – perhaps – that dismal little comics like The Telegraph have been obsessed with their trivia and tat to the extent that they have taken their eyes off the ball?

Entirely unconscious of the irony, however, the paper pronounces that "Britain" – meaning, of course, successive generations of politicians and dim-witted hacks - has given too little thought to the consequences of this development, and needs to consider urgently how a British foreign policy would differ from the current European one.

…before being able to implement such a policy, we must first recover control, in practice as well as in theory. Britain is the world's fifth-largest economy and fourth military power. We have had a benign impact on mankind: ending slavery, spreading free trade, helping to defeat Nazism and Communism. If we cannot act independently on the world stage, it is hard to see who can.

But is the Telegraph actually suggesting that? Don't bother answering. That remains the elephant in the room – positioning the paper in its usual hazy mish-mash of incoherence. When it wakes up, it can see the problems, but is terrified of articulating the solution. But, now that it has woken up, perhaps it might think about growing up.