Nope we still can't solve it 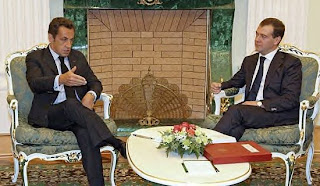 It seems incredible but President Sarkozy still seems to think that he has some kind of a role to play in the crisis in the Caucasus. He keeps running around, accepting Russian peace offers and cease-fire deals and then finding that there is not the slightest intention on the Russian side of fulfilling the obligations that they themselves propose. I must say, it is not entirely clear why the Russians keep playing this game unless, as some analysts have been suggesting, there are splits among the various leaders, military and civilian and, above all, between former President, now Prime Minister, Putin and his teddy bear.

Reuters entitles the news item "Russia starts Georgia pullout" but this is a little misleading. Russia is not starting anything of the kind; she is merely promising to do so.

Russian troops will pull back from Georgia's heartland by the end of this week, the Kremlin said on Tuesday, but NATO said it was freezing contacts with Moscow until all Russian forces were out of the country.

This reminds one of the very popular Russian word, which has flummoxed many a Western businessman: сейчас (seychas). Its direct meaning is this minute (or this hour if you wish to be pedantic) but, in actual fact, it conveys a sense of urgency that is just inferior to the Spanish mañana. Yes, yes, yes, we're going, we're going.

So the soft power of the EU has failed and President Sarkozy's readiness to go along with whatever President Medvedev told him has achieved nothing. To be fair, as Joel J. Sparayregen has pointed out on American Thinker, Secretary of State Condoleezza Rice, a Russian expert in her academic days, has faltered at first as well. Unlike President Sarkozy, she has acknowledged it and American demands have become tougher as has NATO's stance, though there is no mention of Georgia becoming a member in the near future. On the other hand, if the near future includes Russian troops on Georgian soil, that might be quite a wise precaution.

The near and mid-term future will, it seems, include missiles positioned in South Ossetia and, possibly, Abkhazia, pointing at Georgia, in order to protect the Russian citizens of those two regions. Since they are now unlikely to be anything but part of Russia, the protections seems excessive.

Almost certainly Russia will institute one of her economic blockades of Georgia. After all, we cannot have the latter being economically successful as that would humiliate Russia.

The latest prediction is that Russian forces will pull back to prearranged positions by August 22, just about the fortieth anniversary of the invasion of Czechoslovakia, but this will not mean simply going back to Russia and South Ossetia but staying in the "buffer zone", that is 14 kilometres beyond the border inside Georgia itself. It would appear that the French negotiators thought this was perfectly reasonable. Then again, did they have an option if nobody was prepared to use stronger methods? G8? Well, no, G7, I think.

CNN entitles its analysis rather whimsically “NATO grapples with angry bear”. In itself, the analysis tells us nothing new. America, Britain, most of the former Soviet colonies and, one assumes, Denmark and Canada are calling for tougher measures; France, Germany and Italy are cowering and chattering about keeping channels open. What that means is anybody’s guess. After all, nobody is suggesting never talking to Russia again.

It is unfortunate that CNN goes along with the analysis that Russia and her self-appointed supporters have managed to feed into the public discourse:

But western ministers, it seems, have only just taken aboard how angry a resurgent Russia, traditionally fearful of encirclement, has been about the U.S. missile defense plan with installations in Poland and the Czech Republic, about the steady eastward march of NATO and the EU, and about the West's ready endorsement of Kosovo's breakaway from Russia's allies in Serbia.

Largely this is tosh. The missile defence plan is no threat to Russia and the former Soviet colonies became members of NATO because they were afraid of the bear. In other words, they are not surprised by the latest developments because they have always expected something like this.

There has never been the slightest indication that Russia cared much about Serbia as the Serbs have vociferously complained about and Kosovo is of little importance to them. The plan to use South Ossetia to threaten and invade Georgia has been maturing for, at least, five years when those Russian passports were first handed out.

Somehow, the myth of the resurgent, angry and humiliated Russia seems to have taken hold. I am in the process of writing a long posting on the subject so shall hold my fire till then but I may add that if Russia is afraid of encirclement then the country she is most fearful of is China.

When it comes to invasion from the east, Monty’s saying of the three rules of war do not apply. Mostly, these have been successful and Russia knows it. A little reported recent development was a border agreement signed between the two countries on July 21, which is returning 174 sq km of territory to China.

The areas to be returned - the Yinlong Island (Tarabarov Island) and half of the Heixiazi Island (Bolshoi Ussuriysky Island) - are territories the former Soviet Union occupied during a 1929 border skirmish.

They are located at the confluence of the Heilongjiang and Wusulijiang rivers that serve as a natural border between the two countries.

Following years of negotiations, the two sides signed an agreement for the return of the areas in October 2004 when Vladimir Putin, then Russian President visited Beijing.

After that, the two neighbors spent three years of negotiations on delineation.

Curiously enough, this was not much reported in Russia, either.

The Eurasian Daily Monitor, which has been following the growing crisis in Georgia long before most of the Western media and politicians realized there was anything to follow (as it happens we have written about it a few times ourselves, here for instance) gives a more detailed analysis of the non-withdrawal and the rings President Medvedev has been running round President Sarkozy.