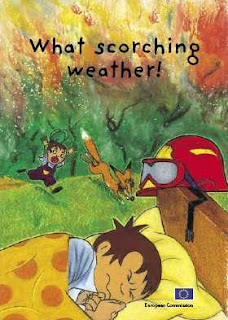 Viewed from this side of the divide, there can be no doubt that the intellectual argument on "climate change" has been won. Not only is there ample evidence that there has been no warming for the last ten years, with the last year showing significant signs of cooling, the scientific basis of the AGW global warming creed has been so eroded that it no longer has any credibility.

But, if the argument has been won, that very fact is an irrelevance. So detached now is our government from any semblance of intellectual coherence that mere facts and argument have no impact whatsoever on policy.

By our "government", we do of course mean the European Union, for it is the driver of climate change policy, which then determines member state policies. We, at a national level, have absolutely no say in the major strategic decisions. The role of national governments is simply to devise means of implementing the diktats agreed in Brussels.

That much is evidenced today by the EU commission's launch of a public consultation on the "post-2012 agreement" on climate change. And, from all the propaganda material surrounding the launch, it is as if the debate on the issue had never happened. The commission in particular is entirely immune to discourse, its views frozen in time, locked into the gospel according to St Gore.

Thus does it offer an online "stakeholder" consultation form which admits only views on how it should achieve its declared policy of seeking to "limit global warming to no more than 2°C above pre-industrial temperatures". That is the only game in town, set out in its communication of January last year, from which it has no intention of deviating.

All the commission is interested in is "detailed views of stakeholders on the different building blocks of the Bali Road Map", all with a view to reaching an agreement in Copenhagen by the end of 2009, during a conference which will "bring together the world's nations to tackle this global challenge effectively". It is important, says the commission, "that our contribution to this discussion is shaped by the knowledge and expertise of the different EU stakeholders."

In that context, there cannot be any national debate on the climate change – the issue has been decided at EU level. For national "actors" to re-open questions on the agenda would put them in direct conflict with our masters in Brussels.

That is why, of course, national politicians do not and cannot entertain any debate, and why Cameron and his minions shy away from anything substantive, preferring instead to deal with social and other issues which have no immediate EU dimensions.

This also explains why the Conservatives are not engaging in a debate on our energy supplies. The EU has already decided that energy policy is subordinate to its plans to control climate change, having set out its stall in its energy green paper in 2006. It has handed down the Holy Writ.

That makes any ideas of a national energy policy, majoring on the three essential elements of affordability, adequacy and security of supplies, entirely at odds with EU policy. And that means my articulating ideas in my post on a future Tory energy policy over the weekend was a complete waste of time. The Tories are never going to engage seriously in this debate, as it would mean challenging the received wisdom in Brussels.

Policy on such strategic issues is, these days, made in Brussels. The new game being played by our politicos is to avoid any discussion on such matters, in the hope that we will not notice.

Meanwhile, here is another book (illustrated top) for Cameron to add to his reading list. As a true believer, he will find it compelling.