Return of the freeze? 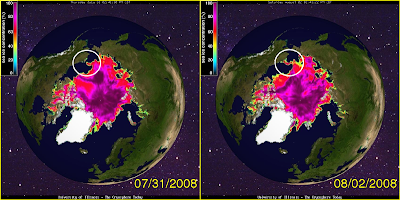 In one of the three stories offered by Booker today, he returns to the long-running saga of the vanishing Arctic ice.

Increasingly desperate to sustain their scare, as the evidence suggests otherwise, the global warmists have recently been focussing on this more and more writes Booker, picking up on the fact that the North Pole is still surrounded by six million square kilometres of ice, a million more than this time last year.

However, there may be more interesting news to come. In a comment to the piece on Watts up with that the writer notes: "With the sun's elevation now dropping about 2 degrees per week, and the Arctic Oscillation forecast to be negative through mid-August, there won't be much more melting in the Arctic this season."

Looking at the ice melt graph on Cryosphere today, this seems to be confirmed. But, with two million square kilometres yet to go before last year's melt-back is reached, the comparative images over the last few days (pictured - click to enlarge) also reveal an interesting phenomenon. In the area circled, on the fringes of the Beaufort Sea, the ice seems actually to be increasing - a month earlier than usual.

It is early days yet but, if this becomes a trend, we will be seeing the smallest melt-back since the winter of 1997-8. And this would be in a year when, as Booker observes, the US National Snow and Ice Data Centre said it was "quite possible" that all Arctic sea ice might vanish.

It's really frustrating, he adds, how that "end of the world" we were promised keeps on having to be postponed.

Yet, still they drone on.