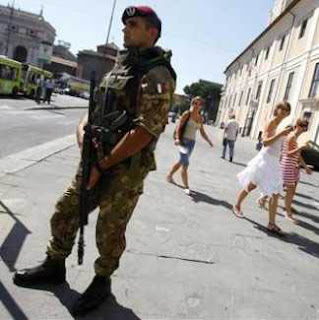 I don't think anyone is under any illusions – apart from the British media - as to why Berlusconi has put 3,000 armed troops on the streets of major Italian cities.

Ostensibly a measure to "help cut down crime", something claimed by both interior minister Roberto Maroni and his defence colleague Ignazio La Russo, this is nothing more than a fig-leaf, the Italians themselves being very well aware that most of the crime in Italy is Mafia-related, which will be untouched by this "crack-down".

If for "crime", however, you read "immigrants" – and in particular, the Roma – then the agenda becomes clearer, as does the timescale.

Coming on the back of the programme to fingerprint the inhabitants of the 700 or so immigrant encampments dotted around the major cities, the next move comes in October, when the "census" is finished, when the government plans to dismantle all remaining unauthorised settlements.

That the troops have been put on the streets now, with a deployment that is scheduled to last for an initial period of six months, is clearly – on the one hand - a pre-emptive strike, as unease grows at the scale of the "census", and – on the other - a preparation for the major upheaval that is to follow in a couple of months.

It is no coincidence, therefore, that in the main, the troops are being stationed mainly in or close to the camps and at the growing number of immigrant holding centres, all on the outskirts of the cities.

When the bulldozers move in during October – as indeed is planned – there is undoubtedly going to be trouble, as upwards of 160,000 gypsies are going to be targeted, even though up to three-quarters of them are Italian citizens. 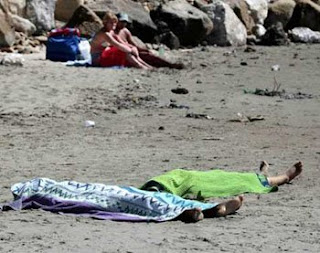 That this "pogrom" will have the support of the bulk of Italian people is evidenced by a recent incident in Naples (pictured) when the bodies of two Roma girls who had drowned in the sea were left covered with towels while beachgoers continued to sunbathe.

Comparisons are now being made between this government's action and the census of Jews carried out by Benito Mussolin in 1938, the beginning of a process that put many of them in concentration camps. The Italian government, of course, denies any such connection, but its actions display a rooted determination to clear out what are clearly considered unwelcome "guests".

And all of this is going to present something of a problem for the "colleagues" in Brussels, who have been soft-peddling on their condemnation of the Rome government's action. When the troops go into action for real, however, even the EU is going to find it difficult to turn a blind eye. Unless it takes a firm line – where Italy leads, other member states will want to follow.