There is no hope 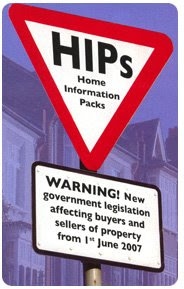 In the dim mists of days bygone, one used to read the leaders of the great broadsheets and nod in appreciation of their sagacity and wisdom, confident that, whatever else was wrong with the world, at least here were a group of writers that knew what they were talking about.

And yes, I know, this probably harps back to a time that never existed and I am looking back through rose-tinted mists to an era that fits alongside Bobbies who you could trust, red Routemasters that you could hop on and off, trains that ran on time … er …

All the same, just when you think the standards of our modern leader-writers could not get worse, they get worse – witness the utterly fatuous leader in The Daily Telegraph today (where else?) on Home Information Packs.

Headed, "High time to scrap Hips", the importunate writer intones that Hips have come to symbolise much that is wrong with this Government, going on to tell us that they were originally supposed to include a home-condition report but:

When it became apparent that buyers would not rely upon a survey produced by the vendor, the Government sought to give the scheme a spurious veneer of environmental legitimacy by insisting they contain information about energy-efficiency levels. Inevitably, those opposed to Hips are now denounced for being "anti-green".

The information about "energy-efficiency levels" – as everybody seems to know except this leader-writer - comes to us courtesy of Directive 2002/91/EC of the European Parliament and of the Council of 16 December 2002 on the energy performance of buildings.

This was noted, amongst others by Christopher Booker, many times, not least in The Daily Mail last August when he wrote:

Last week, yet again, there were front-page headlines over the ongoing farce of Home Improvement Packs. Almost every housing expert in the land wants to see them scrapped.

But how often do ministers honestly admit to us that the reason they cannot abolish HIPs is because we must comply with an EU directive requiring all homes sold to have an "energy performance certificate" (an edict issued by Brussels five years ago to fight "global warming")?

Completely unconscious of the reality of our new government in Brussels, this airhead leader-writer then prattles on about, "A law that cannot be enforced is a bad law," noting that a joint report from the National Association of Estate Agents, the Law Society and the Royal Institute for Chartered Surveyors has called for fundamental changes to Hips. "Far better in our view," then says our leader-writer, "would be to get rid of them."

Far better, we might add, if we had leader writers who knew what they were talking about, but then that is probably asking too much.