Maybe they should stop complaining 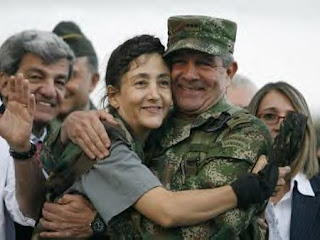 A small news item in today's Wall Street Journal Europe informs us that:

The Red Cross accused Colombia of breaking the Geneva Convention by using its emblem in a disguised military operation to rescue hostages from guerrillas.

Others, such as Radio Free Europe, devote more space to the story. The Red Cross spokesman pointed out that such misuse would endanger other operatives in the field. The Colombian government has apologized though clearly they do not think that there was something wrong with carrying out the operation.

Some years ago we, on this blog, would have shared that indignation. The symbol of the Red Cross organization was so highly regarded because of its work and achievements that using it for any other purpose would have appeared to be completely immoral apart from being dangerous for the operatives.

Is that still true, one asks oneself. There was, after all, the story of wanted terrorists being carried through American check points by the Italian Red Cross in Iraq, allegedly, in return for the release of kidnapped aid workers. I do not recall allowances for this sort of behaviour in the Geneva Convention. 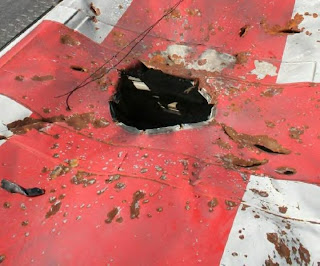 What of the Red Cross's rather ambiguous involvement in Qanagate, described by my colleague here and here and other postings. As I recall, at one point Green Helmet Guy (remember him?) appeared as a bona fide Red Cross operator, proudly wearing the emblem. Again, I find it hard to imagine how that fits in with the Geneva Convention. Come to think of it, there was that rather curious story of the Red Cross ambulance and the hole in the middle of the symbol that was just a little suspect. Should the International Committee not have made a statement about that?

There were the appearance of Red Cross workers and vehicles in the Pallywood and Hezbollywood productions with no statements from the hierarchy about breaking the Geneva Convention. Again, I have searched in vain for words in that Convention that allow and approve behaviour of that kind.

At the very least, one would expect the International Committee of the Red Cross organization to repudiate those of its people on the ground who misuse the symbol to this extent. Should they not worry about endangering their other workers by some being so obviously involved in political activity?

There is a more important aspect that the said International Committee should address. Why is it that the Colombian army assumed – and, as it turned out, assumed correctly – that the appearance of their soldiers dressed in Che Guevara t-shirts, under various NGO banners, such as the Red Cross would fill the FARC terrorists with calm anticipation of friendly activity?

As far as we can tell (and it was analyzed carefully by Mary Anastasia O’Grady in the Wall Street Journal) the assumption was that those guys in their Che t-shirts under the Red Cross and other similar insignia were expected to help FARC by transporting the hostages.

How does this accord with the Geneva Convention, ladies and gentlemen of the Red Cross?

UPDATE: One of our readers sent us a link to an interesting story in which the Red Cross symbol was used to smuggle drugs from Venezuela to Sierra Leone from where it was presumably destined to European countries. There is no evidence, as far as we can see, of any involvement by any Red Cross worker. Nevertheless, this can be described as breaking the Geneva Convention and endangering Red Cross workers. I have no recollections of any statements or protests.
Posted by Helen at 19:13