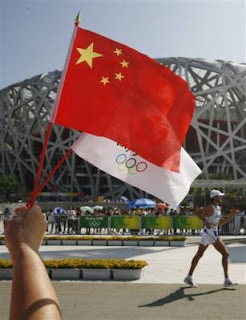 Some of our readers might think that we are failing in our duty to comment on the world by ignoring (well, almost) the big event of the summer - the Olympic Games in Beijing. Well, perish the thought. Not only has my colleague written on the effects the Games have been having on the people of China outside the Olympic village but I have put up a posting on the BrugesGroupBlog about the EU and Olympics.

A couple of things need to be added. One is about China. Many of the factories that are now idle were closed down in the weeks before the Games started in order to cut down on pollution. Whether it worked we shall find out when the sports folk come back home and find their lungs functioning rather less well than before.

Secondly, I should like to pass on an idea suggested by one of our readers: Russia is not doing terribly well in the medals' table. Those of us who recall the old struggle between the Soviet Union and the United States for top position find this new multipolar Olympic table rather weird.

Well, suggested said reader, is that not the real reason for Russia deciding to reconquer its old empire? To restore her position in the Olympic table next time (that would be 2012 in London)? As I recall, the Ukrainians used to do quite well in track events. No wonder Russia is looking to that country now.
Posted by Helen at 11:52